Biological Effects Of Smoking On Health 2

A report into the biological effects of smoking on health

Cigarette smoke is composed of over 4000 different chemicals, many of which are extremely toxic. Cigarettes consist of the following components; tar, nicotine and Carbon Monoxide (CO), which are hazardous to our health. The tar settles in the lungs and stimulates a series of changes that leads to obstructive lung disease (see figure 1) and lung cancer. Nicotine however, is present as an addictive element of cigarettes. The nicotine stimulates the nervous system to reduce arteriole diameter and release adrenaline. This sudden increase in adrenaline leads to an increased heart rate (HR) and consequently blood pressure (BP). CO is a compound that competes with oxygen (O2) to bind irreversibly to haemoglobin, the red pigment that gives blood its colour, and decreases the O2saturation within the body. Collectively, these three components can drastically alter the way our body functions as tar is also a sticky compound which blocks the airways and arterials in our lungs and heart respectively. This causes a decrease in the surface area and total volume of O2 inhaled, and causes the heart to compensate by increasing its stroke volume. This results in straining the heart muscle as it needs to increase its heart rate to compensate with the lack of oxygen and the needs of our cells. 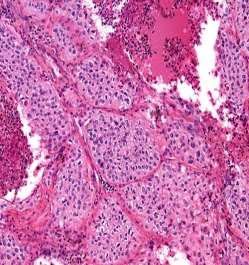 As stated earlier, smoking can cause chemical changes towards platelets resulting in them becoming sticky and form clots when not needed. These clots are known to develop blockages and affect blood flow to the heart or brain, resulting in a heart attack or stroke respectively. These occur due to the blockage starving the brain and heart of oxygen. Smoking is also known to damage the structure and the function of the lungs. The main disorder caused by smoking is Chronic Obstructive Pulmonary Disease (COPD). COPD consists of a number of diseases caused by smoking such as Emphysema and Chronic Bronchitis.

Heart Disease and stroke are the main causes of death and have a higher risk of occurring in people who smoke. This is because the methanol and tobacco damages the lining of blood vessels throughout the body. These linings are important as they help maintain blood flow and when damaged can result in blood flowing to and from the heart to become blocked. The main side effect caused from this is increased blood pressure, which can result in major long term effects of the body. As our blood pressure increased, the lining of the blood vessels becomes thicker, narrowing the diameter of these vessels. This damages and affects the blood flow preventing it from flowing smoothly resulting in blood clots. The body is unable to repair these damages due to the chemicals in tobacco smoke interfering with the body’s ability to repair the damaged lining. The presence of CO from the smoke and nicotine both put a strain on the heart by making it work faster. 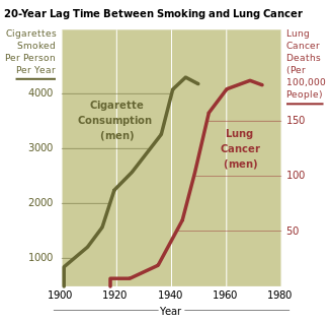 Cigarette smoke began as a en masse at the start of the 20th century when doctors noticed an increase of lung cancer cases from 1930 onwards; there is now a reported 35,000 deaths from lung cancer every year. The correlation of lung cancer and smoking can be seen in the graph below.

As a consequence to smoking, there is an array of medical conditions that can arise from smoking regularly; these include lung disease, lung cancer and heart disease. Lung cancer is caused by the carcinogens that are found in cigarette smoke.

It is the carcinogens that mutate the DNA of the epithelial cells that line the lungs and this is the first step towards the formation of a tumour, also known as the primary tumour. The tumour can then spread into the lymphatic system through the bronchial epithelium and from here is able to spread to other vital organs to cause a secondary tumour.

Every individual possesses a line of defence against DNA mutations; these are in the form of tumour suppressor genes such as p53, BRAC1 and BRAC2. When a mutation arises, it can often lead to certain forms of cancer developing such as breast cancer in women with a mutation in the BRAC2 gene. Recent research has shown that p53 mutations are frequent in tobacco-related cancers with the mutation load being higher in smokers than non-smokers. In lung cancer, the p52 mutational patterns are different between smokers and non-smokers with an excess of G-T transversions in 30% of smokers compared to the 12% found in non-smokers with lung cancer. Furthermore, at several p53 mutational hotspots such as codons 248 and 273, a large fraction of the mutations are G-T common to all cancers but exclusive to G-A in non-tobacco related cancers. Two important classes of tobacco smoke carcinogens exist in the form of polycyclic aromatic hydrocarbons (PAH) and the nicotine derived nicotinamines with recent studies having presented a positive correlation between G-T transversion hotspots in lung cancer and the sites of preferential formation of PAH along the p53 gene.

Current research has reported that smoking affects the levels of oestrogen and other hormones, thus making it more difficult for women to become pregnant (Surgeon General Report). Furthermore, exposure to tobacco smoke is known to reduce the function of the fallopian tubes another contributory factor to infertility. It has been universally accepted that children exposed to second-hand smoke develop asthma and COPD, which affects over 3 billion people globally. In a study conducted by Tager et al (1983), it was purported that exposure of the developing foetal lung in smoking mothers increased the likelihood of their child developing childhood asthma and possibly COPD in later life. However, whilst the evidence that nicotine is the cause of COPD is minimal, it is clear that it is the direct and specific cause for inducing differentiation of developing lung cells from the normal to the abnormal phenotype (Tager et al).

CO has been known to deprive the foetus of oxygen (Hoffman 2011). Along with CO, tobacco smoke contains other toxic chemicals that can inhibit the development of a foetus. Macnair (2011) reported that there was an increase in the amount of miscarriages had by women who smoked during their pregnancies and those who continue to smoke while they are pregnant are more likely to deliver premature babies with a low birth weight. Babies whose mothers smoke are three times as likely to die from SIDS, Sudden Infant Death Syndrome. Smoking is also known to cause significant damage to the important DNA that every man’s sperm carries and it is this DNA damage that can decrease fertility or lead to miscarriage (Surgeon General Report).

The Lung function of smokers gradually decreases even though the damage to their lining occurs very early. Lung function continues to worsen as long as the person smokes, but it may take years for the problem to become noticeable enough for lung disease to be diagnosed. Smoking causes many lung diseases that can be nearly as bad as lung cancer. Chronic obstructive pulmonary disease (COPD) is a name for long-term lung disease which includes both chronic bronchitis and emphysema. COPD can make it hard to breathe even at rest. It limits activities and causes serious health problems. The late stage is one of the most miserable of all illnesses. It makes people gasp for breath and feel as if they are drowning.

Lung cancer is the leading cause of cancer death in both men and women. It occurs most commonly between the ages of 45 and 70 and has become more prevalent in women in the last few decades because more women started smoking cigarettes in years past. Cancer that originates from lung cells is called a primary lung cancer. Primary lung cancer can start in the airways that branch off the trachea to supply the lungs (the bronchi) or in the small air sacs of the lung (the alveoli). Cancer may also spread (metastasize) to the lung from other parts of the body (most commonly from the breasts, colon, prostate, kidneys, thyroid gland, stomach, cervix, rectum, testes, bones, or skin).

About 15 to 20% of people who develop lung cancer have never smoked or have smoked only minimally. In these people, the reason why they develop lung cancer is unknown, but certain genetic mutations may be responsible. Other possible risk factors include air pollution, exposure to cigar smoke and second hand cigarette smoke and exposure to carcinogens such as asbestos, radiation, radon, arsenic, chromates, nickel, chloromethyl ethers, polycyclic aromatic hydrocarbons, mustard gas, or coke-oven emissions, encountered or breathed in at work, and exclusively using open fires for cooking and heating. The risk of contracting lung cancer is greater in people who are exposed to these substances and who also smoke cigarettes. In rare incidences, lung cancers, especially adenocarcinoma and bronchioloalveolar cell carcinoma (a type of adenocarcinoma), develop in people whose lungs have been scarred by other lung disorders, such as tuberculosis. Also, smokers who take beta-carotene supplements may have an increased risk of developing lung cancer. Lung cancer may cause wheezing by narrowing the airway. Blockage of an airway by a tumour may lead to the collapse of the part of the lung that the airway supplies, a condition called atelectasis. Other consequences of a blocked airway are shortness of breath and pneumonia, which may result in coughing, fever, and chest pain. If the tumour grows into the chest wall, it may cause persistent, unrelenting chest pain. Fluid containing cancerous cells can accumulate in the space between the lung and the chest wall. Large amounts of fluid can lead to shortness of breath. If the cancer spreads throughout the lungs, the levels of oxygen in the blood become low, causing shortness of breath and eventually enlargement of the right side of the heart and possible heart failure. Lung cancer may grow into certain nerves in the neck, causing a droopy eyelid, small pupil, and reduced perspiration on one side of the face together these symptoms are called Horner syndrome (see Horner Syndrome). Cancers at the top of the lung may grow into the nerves that supply the arm, making the arm or shoulder painful, numb, and weak. Tumours in this location are often called Pancoast tumours. When the tumour grows into nerves in the centre of the chest, the nerve to the voice box may become damaged, making the voice hoarse.

Lung cancer may grow into or near the oesophagus, leading to difficulty swallowing or pain with swallowing. Lung cancer may grow into the heart or in the midchest (mediastinal) region, causing abnormal heart rhythms, blockage of blood flow through the heart, or fluid in the sac surrounding the heart (pericardial sac). The cancer may grow into or compress one of the large veins in the chest (the superior vena cava); this condition is called superior vena cava syndrome. Obstruction of the superior vena cava causes blood to back up in other veins of the upper body. The veins in the chest wall enlarge. The face, neck, and upper chest wall including the breasts can swell, causing pain, and become flushed. The condition can also cause shortness of breath, headache, distorted vision, dizziness, and drowsiness. These symptoms usually worsen when the person bends forward or lies down.

Lung cancer may also spread through the bloodstream to other parts of the body, most commonly the liver, brain, adrenal glands, spinal cord, or bones. The spread of lung cancer may occur early in the course of disease, especially with small cell lung cancer. Symptoms such as headache, confusion, seizures, and bone pain may develop before any lung problems become evident, making an early diagnosis more complicated.