About 80% of Mozambique’s population live in rural areas and depend on wood for cooking and for heating of water for domestic use, space heating and drying of foodstuffs.1This reliance on trees could spell disaster should population levels rise. Mangroves are being removed and converted into rice farms and salt pans, aquaculture and housing. Further offshore, corals are subjected to destructive fishing practices (e.g. use of fine mesh nets and dynamite).

Illegal and unsustainable wildlife use, and human wildlife conflict

In Mozambique like elsewhere in Africa and Asia, habitat loss is causing humans and wildlife to share increasingly smaller living spaces. Both sides are losing in the conflicts that ensue, such as in and around the Delta of the Zambezi River. There, crocodiles and hippos are coming face to face with humans increasingly often, while poaching and other illegal activities put species in jeopardy. In some places, such as Quirimbas National Park, there are concerns that current levels of resource use – e.g. sand oysters – may not be sustainable, and are already leading to diminishing harvests of fish and other resources. For local people, this means reduced incomes and increased poverty in the long run.

Off Mozambique’s coast, tankers carrying crude oil from the Arabian Gulf have resulted in contamination of the sea from spills and discharge of polluted ballast waters. In urban settings, rural sewage treatment is inadequate, exposing people to potential outbreaks of disease.

Poor farming practices and deforestation contribute to sedimentation of rivers that run to the sea, degrading seagrasses and coral reefs

Water is perhaps South Africa’s most critical resource – one of low abundance and growing needs. Tie that with problems of increased land use and population growth and you have several big reasons for concern.

Lack of water South Africa’s freshwater supply is almost stretched to its limit. Less than 10% of South Africa’s rainfall is available as surface water, one of the lowest conversion ratios in the world. The country’s groundwater resources are equally limited. Despite regulations of river waters, in many catchments the need for water exceeds the supply and quality is often below standards. Given the projected growth in population and economic development, South Africa faces tough times in meeting water demands in the decades ahead. The shortfall in freshwater is tied to growing demands, but also to other issues such as loss of natural habitat and potentially climate change. 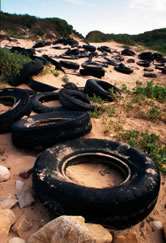 Destruction of natural habitats The land of the “fine-leaved plants”, the South African Fynbos, is one of the world’s most impressive botanical kingdoms – a mind-boggling variety of plants that is richer than any other comparable sized area in Africa. An estimated 8,500 species of vascular plants, of which 70% are endemic (they are found nowhere else in the world), are reported here. But because the area has been heavily settled for several centuries, large swathes of natural vegetation, particularly in the lowlands, have been cleared for agriculture and urban development. Similar problems face the Namib-Karoo-Kaokeveld desert, a very distinctive and floristically rich ecoregion with highly diverse endemic plant communities. Here, poor land management, conversion of marginal lands for cultivation, dam construction, mining, and illegal extraction of selected succulents for black market trade, pose a suite of threats.

Overfishing Along the West Coast of South Africa, there is persistent overharvesting of many commercially valuable species and products such as pilchard, anchovy and rock lobster. Further at sea, some fish stocks have been over-harvested, and several species face local extinction. These dangerous trends follow improvements of fishing methods, increase in fishing effort and the establishment of fishing industries.

Introduction of exotic species South Africa’s natural habitats are being colonized by alien species at great rates. Introduced species, particularly North American gamefishes such as largemouth bass and smallmouth bass, are pushing out indigenous species and threaten to lead some of them to extinction.

Pollution A high level of traffic associated with crude oil transport from the Arabian Gulf has resulted in contamination from tankers’ spills and discharge of polluted ballast waters.