Comparison Of Economic Systems Germany And The Uae

“Economy is the state of a country or region in terms of the production and consumption of goods and services, and the supply of money”(Oxford Dictionaries 2012).

Before profound studying about the mentioned countries one important aspect should be taken into consideration the similarity between these two countries is their critical role in their region, both of those countries has a significant influence on the political and economy climate in their respective regions.

Germany is located in Central Europe, south of Denmark, between Poland and the Netherlands. It has a direct access to North and Baltic seas. The country’s total area is 357,022 sq.km and the population around 82 million people. Historically, Germany has evolved couple of unifications and reunifications including the last one in 1990. Excellent infrastructure, location, skilled workforce and moderate wage rate make Germany very attractive for business. Notwithstanding, there are some environmental problems, such as air and water pollution, soil erosion, diminishing biodiversity and shortage of resources.

The United Arab Emirates is located on the eastern part of Arabian Peninsula and shares borders with the Kingdom of Saudi Arabia to the south, Oman to the east and sea sharing borders with Qatar. Also, country has a direct access to Persian Gulf and Indian Ocean. The UAE’s total area is much smaller, only 83,600 sq. km. The United Arab Emirates’ thrift and stability is substantiating by its considerable oil wealth that was discovered in 1960th, most of which is concentrated in Abu Dhabi – the country’s capital (“United Arab Emirates profile’ 2012). Although, the UAE will remain be contingent on the oil reserves for many years to come, nevertheless, it’s level of dependency is gradually declining. The main role in development was taken by Dubai, which has become a regional financial, commercial powerhouse and o one the prime tourism centers of the Gulf Region. Moreover, a strong combination of oil prices, plentiful financial and fiscal resources, political stability, regulatory reforms and infrastructure development will backing the UAE’s country risk profile.

Germany represents a federal parliamentary, representative republic with a six main political parties, dominated by the Christian Democratic Union, the Christian Social Union of Bavaria and the Social Democratic parties. The head of the government who exercises executive power is a Chancellor Angela Merkel. Nevertheless, due to the fact that Germany is a member of European Union and G8, policies are subordinated with those organizations. As the biggest economy in Europe, Germany contributes 25% of Eurozone’s GDP.

The political structure of the United Arab Emirates is a federation of seven monarchical emirates. His Highness Sheikh Khalifa bin Zayed Al Nahyan is an emir of Abu Dhabi and the President of the country. The federal system of government includes the President, the Prime Minister, the Supreme Council, Crown Princes and Deputy Rulers, the Federal National Council,the Council of Ministers (UAE Government 2012).

Although, Germany has the second largest population in Europe, it faces an aging population. This implies some long term problems, such as increase in governmental welfare expenditures, healthcare expenses, pension’s payments and loss in income tax. Nevertheless, country’s immigration policies and laws set up favorable conditions for immigrants, and immigration rate exceeds emigration level. 10% of Germany’s population consists of non-native nations, such as Turkish, Greek, Italian, Russian, Polish, Spanish and Serbo-Croatian.

According to World Bank, UAE’s locals constitute only 16.5% of the total population. Meanwhile, the number of expatriates increasing over time, Indians accounts the biggest part with a 1.7 million people. Also, most of native representatives tend to work in public sectors, benefiting with a higher salaries, shorter working hours, greater job security, while 98% of private-sector workplaces are occupied by expatriates.

As the graphs below represent the population pyramids for compared countries, we can mention the aging population in Germany, as was described previously. Also we pay attention on difference in population composition of those countries. Almost in every age group Germany’s population is somewhat balanced between male and female genders. On the other hand, we can see the drastic difference between male and female composition of United Arab Emirates’ population. Age groups from 20-64 is highly dominated by males; this caused by the fact that most of them are expatriates and they are coming to the country in search of a job, leaving their families in home countries. 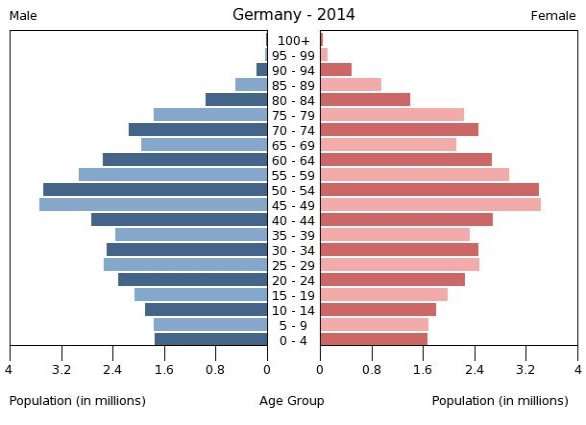 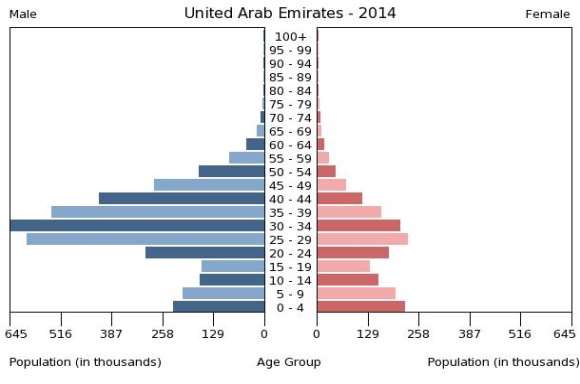 The economy of Germany continues to be based on individual consumption and going to strengthen by further investments, meanwhile next exports is still deterring growth. Germany has been decreased its dependence on exports in recent years. In addition, the Social Democratic Party has successfully pushed for an expenditure increase in infrastructural, educational sectors, as well as pension increase and minimum-wage regulation across all country by 2015.

Eurozone’s debt-crisis caused uncertainty on consumers’ confidence and future expectations about their personal finances. Income is continuing to be supported by stable employment and increase in average wages. Also the expected perseverance of historically low interest rates will reinforce investment growth during upcoming years. Cheap mortgages will robust construction industry. Exports will recover during 2014, but the Eurozone crisis and geopolitical conflicts in the Ukraine and the Middle East are limiting scope. Although consecutive economic stabilization in the European Union will permit German exports to strengthen, the spikes in rebound trend during end of 2013 and beginning of 2014 – the natural structure of European debt crisis which in turn will limit the speed and vigour of export recovery. Furthermore, incandesce of Ukrainian situation and possible further escalations of actions in Iraq are incrementing world’s uncertainty and keeps international trade back.

The expected growth of the GDP of UAE is 4.3% in current year. Compared to the previous year the GDP growth, the highest after Great Recession, has declined. Economic growth had a strong acceleration in 2013 of 5.2%, but then economy faces some difficulties. Oil GDP expands only at a 1.8% rate this year, following 4.8% in 2013. With average global price of $109 per barrel in 2014, UAE oil output – which concentrated within the Abu Dhabi emirate – is going to reach around 2.7-2.8 million barrels per day.

Non-oil sectors of the economy will continue to outrun growth driven by oil extraction. Activity in the non-oil sector has been steadily recovering following the downturn in 2009 and will continue to be the driving force of the economy’s growth momentum in 2014. Non-oil GDP is continuing holding on the same level as in 2013 – approximately 5.4%. The UAE has economy is relatively stable amid the disorder in the region. The key non-oil activities such as tourism, retail, and service help to drive the growth. Manufacturing activities led by aluminium and petrochemical industries is going to strengthen the following years. Also strong economic conditions will benefit both the transport and trade sectors. Real estate and construction sectors also improved along with overall market conditions. Infrastructure and development projects also had an additional motivation with Dubai’s award of next Expo city. A set of regulations implemented by authorities will help against a repeat of a boom cycles in Dubai. All these facts regarding Expo 2020 should provide a platform for a stable growth in tourism, construction, transport and hospitality industries in next 5 years.

GDP by type of Expenditure

According to the expenditure approach of calculation of Gross Domestic Product, it equals to the sum of such components as consumption (C), investment (I), government purchases (G), and net export, i.e. difference between export and import (NX): Y=C+I+G+NX. 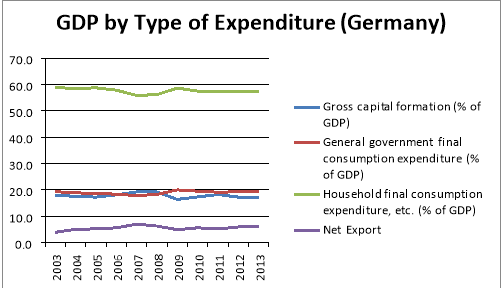 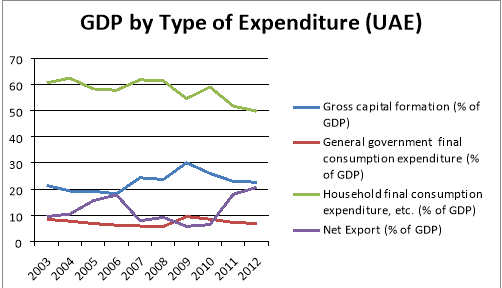 UAE consumer inflation surpassed the 2% mark in April for the first time in five years, according to the National Bureau of Statistics. Housing price inflation was relatively continual with 2.6% year on year in May; Dubai’s inflation has lowered to 3.7% compared to 4.9% in April. Real estate has become the main inflation driver in UAE, excelling food price inflation of 2.1%, even as food prices are increasing at 0.9$ rate per month.

Consumer inflation is soon averaging 2.2% in 2014. The recovery of housing prices reflects the prolonged downturn in the real estate market. The annual inflation rate is expected to soar up to 3% by the end of 2014. Mildness of world’s commodity prices is going to benefit the inflationary pressures. The United Arab Emirates could face higher problems in their inflation outlook if commodity and food prices go up. 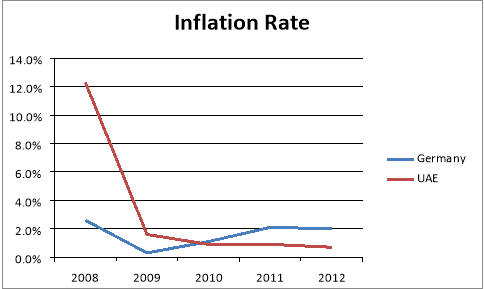 Germany’s nationwide inflation should remain at a very kind level between 1% and 2% in near future. Following the consumer prices inflation leaped from a 22-year low of -0.5% in 2009 to around 2.5% in 2011, the economic deceleration caused by the Europe’s debt crisis during 2012 and early 2013 have led to a softening below 1.5% that will remain during 2014.

On balance, core inflation should move broadly sideways to around 1.5% during 2014, as a boosting effect from the Germany’s economic recovery is offset by the continuing restraints of the Eurozone debt crisis, also the anticipated downward tendency of oil prices due to global supply factors. Although, monetary policy of the European Central Bank (ECB) will be much lighter than Germany’s economy is demanding. Germans’ traditional disinclines to inflation should limit the extent to which Germany’s inflation will exceed the European average.

Also, inflation will be stacked the level ECB considers unproblematic. Also due to pressure on ECB to buy Eurozone’s governments’ bonds and to allow higher inflation rates is enduring upward economic risk within the region. 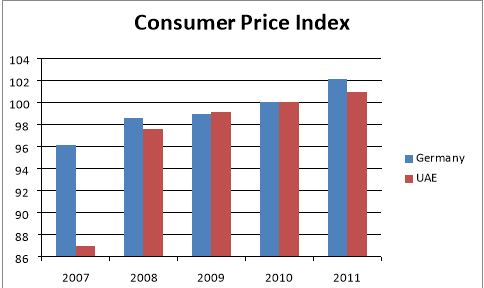 The Human Development Index summarizes the long-term development of a particular country or region. It includes three basic parameters: living standard, knowledge accessibility and health and longevity. The HDI is primarily based on international data provided by the United Nations Population Division, the United Nations Educational.

In year 2013, The United Arab Emirates had a very high HDI value of 0.827— which places the country on 40 out of 187 countries. From the very beginning of its existence as a government, the United Arab Emirates HDI had value increased from 0.640 to 0.827, and soared up for 29.2 percent. This gives us the average increase of about 0.78 percent per year.

The recent Germany’s HDI value is 0.911— which in turns is one of the highest on the globe —positioning the country at 6 out of 187 countries and territories. Taking the same time range as for UAE, 1980 and 2013, Germany’s HDI value increased from 0.739 to 0.911, an increase of 23.3 percent or an average annual increase of about 0.64 percent. This in comparison to UAE is slightly lower. 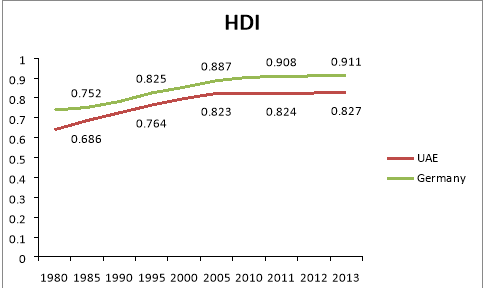 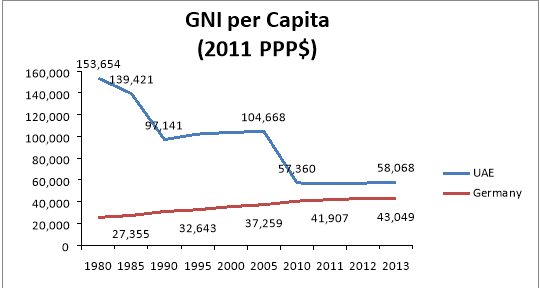