Comparison Of South Africa And The Uk

Culture: Westernized culture. Traditional culture has decreased; this means South Africa has similar lifestyles to those in Western Europe, North America and Australasia.

Customs: these are free imports allowed into the country:

Political Structure: Republic of South Africa (RSA) is a constitutional democracy. It consists of three structures of government: national, provincial and local governments.

Judicial Structure: The body of judges and magistrates who sit in the Courts of South Africa.

Religions: Christianity is the major religion in the UK. Followed by Islam, Hinduism, Sikhism, Judaism and Buddhism. The UK is described as a multi-faith society.

Culture: The cultures are combined. It consists of the 4 main countries the UK is made up of: England, Scotland, Ireland, and Wales. Each has its distinct cultures. Also mainly known as the British culture.

Languages: They do not have a constitutionally defined official language. English is the main language, spoken by 70% of the population. Other 30% include Welsh, Irish, Cornish and British sign language.

Customs: The British are well known for:

Judicial Structure: The judicial system in the United Kingdom are separate judiciaries of the 3 legal systems in England, Wales and Northern Ireland. They are a body of judges that sit in the Supreme Court of the United Kingdom.

About 25% of Britain’s is arable, and almost half is suitable for meadows and pastures. Its agriculture that is highly mechanized and extremely productive, about 2% of the labor force produces 60% of the country’s food needs.

Great Britain is one of the world’s leading industrialized nations. It has achieved this position despite the lack of most raw materials needed for industry. It must also import 40% of its food suppliers. Thus, its prosperity has been dependent upon the export of manufactured goods in exchange for raw materials and food stuffs.

During the 1970s and 80s, nearly 3.5 million manufacturing jobs were created in service-related industries. The main industrial and commercial areas are the great conurbations, where about one third of the country’s population lives.

The administrative and financial center and most important port is Greater London, which also has various manufacturing industries. Liverpool, Britain’s second port, along with south port and Saint Helen are part of the Merseyside conurbation.

Great Britain has abundant suppliers of coal, oil and natural gas. Production of oil from offshore wells in the North Sea began in 1975, and the county is self-sufficient in petroleum. Great Britain’s trade focus has shifted from the United States to the European Union, which now accounts for over 50% of its trade.

Great Britain is the fourth most populous country in Europe. Those of English descent constitute about 77% of the nation’s inhabits. The Great Britain’s population has shown increasing ethnic diversity since the 1970s, when people from the West Indies, India, Pakistan, Africa and China began immigrating, in the early 21century. English is the universal language of Great Britain.

Sovereignty rests in parliament, which consists of the House of Commons, the House of Lords, and the crown. Effective power resides in the commons, whose 650 members are elected from single-member constituencies. The two main parties are the conservative party, descended from the old Tory party, and the labor party, which was organized in 1906 and moderately Social Democratic, is a weaker third party. Both Scotland and Wales have nationalist parties whose goal is the independence of those respective regions.

South Africa’s Department of Trade and industry has launched the R71-million Itukise Unemployed graduates Programme, which will help unemployed graduates get work experience by negotiating placements at companies for them. Itukise provided work experience to unemployed graduates for 12 months. The department will also seek to place interns at companies interested in the programme. The programme also presented an opportunity to develop and market the profile of the manufacturing sector to young people, in provision of decent work and in increasing opportunities for people learning both on and off the job.

The most likely scenario for South Africa’s economic and political trajectory until 2030 is to “chronic underachiever”. The 3.8% growth rate is close to the 3.2% average and had achieved since 1994. But according to the SA futures 2030, ANC will slip under 50% by the 2040 election.

The Madiba Magic path could be reached in one of two ways:

Political instability dominates as both tripartite alliance and the ANC engage in a bitter and violent competition. The Independent Electoral Commission (IEC) was hoping to get the majority of the countries nearly two million 18 and 19 year-olds registered, but ended up in that order with fewer than 700 000. The most interesting coalitions will emerge after the elections, when the ANC, DA and EFF will take the lead.

As an emerging economy South Africa has not remained completely unaffected by the turmoil in other emerging economies world-wide, especially in Asia and lately also in Russia. This negatively affected investors’ confidence in these countries.

Political change is an empty phase if it is not accompanied by changes in the socio-economic sphere, leading to meaningful changes in the quality of life of the ordinary citizen.

You may find South Africa at the south part of the African continent. It stretches across from north to south, for at least 1600 km. It has latitude between 22 and 35 degrees.

And it also stretches from east to west for 1600 km, between 17 and 33 degrees longitude. 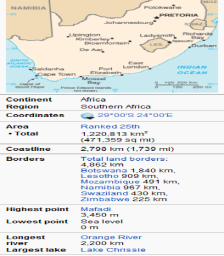 Great Britain is located off the north western coast of Europe. The total area of the United Kingdom is approximately 245,000 square kilometers. It is the ninth largest island in the world, and the largest in Europe.

The term Great Britain is used to refer to England, Wales, Scotland and Ireland because it’s on the largest island in Europe.

This list contains the area sizes of the countries: 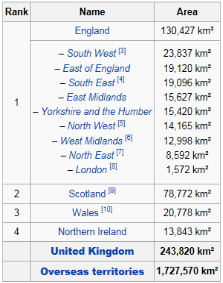 The demographics of South Africa encompasses around at least 52 million individuals of diverse origins, language, cultures, and religions. In 2010 were the last census been held and the next census will be taken anywhere from 2016

Mortality: In South Africa statistical release has presented information on mortality and causes of death, this were all based on death notification forms that were received from the Department of home affairs for death that has been occurred in 2009. The outline release trends in mortality from 1997 to 2009, differentials in mortality are selected by demographics, social and geographic characteristics for death occurred in 2009.

Fertility: There has been a widespread agreement in general that fertility has begun to decline amongst all major population in South Apartheid prior to the end of apartheid. It has occurred at a much faster level for whites and Asians as they are compared to mixed race and Africans. This has occurred amidst the impoverishment of millions.

In every 10 years a census is taken simultaneously in all parts of the UK. Data for England and wales is collected by the national statistics and they are responsible for it. The total population of the United Kingdom was 63.181.778 in the 2011 census. 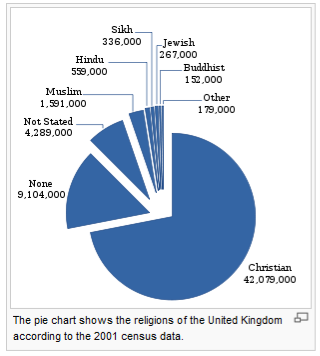 Population : By 7.0 percent since 1971 has the UK `s population increased, from 55.9 million in more recent years growth has been faster of a greater result number of births rather than deaths from the late 1990`s with an increasing factor of migration.

Unemployment: There has been measured by the office for national statistics within months that unemployment stood at 7.1 percent, or 2.32 million people out of work.

Mortality rate: In the United Kingdom are alcohol-related deaths a number of areas that were combined and were chosen to cover range of economic and social housing issues.

Life expectancy: Compared to a one person in the early 1980`s a man born now can expect more than seven extra years of life ahead. Calculations have showed that girls that were born between 2010 and 2012 could expect to live 82.8 years and 79.0 years can boys live.

The social structure of the United Kingdom has historically been highly influenced by the concept of social class, with the concept still affecting British society in the early-21st century.

Although definitions of social class in the United Kingdom differ and are highly controversial, most are influenced by factors of wealth, occupation and education. (2)

The UK government’s welfare cuts and changes to taxation have encouraged economic inequality so intensely that they amount to ‘speeded-up Thatcherism.’ The divide between rich and poor is widening faster than in the 1980s, according to a new report. The slicing of UK welfare benefits and simultaneous cuts in tax credits means that inequality will have soared twice as fast by 2015.

Individual consumption was used as the measure, often cited because it includes all goods and services that a household consumes, regardless of whether they pay for them.

Britain’s rating is boosted by public services such as health and education, which are largely government funded.

A welfare state is a concept of government in which the state plays a key role in the protection and promotion of the economic and social well-being of its citizens. It is based on the principles of equality of opportunity, equitable distribution of wealth, and public responsibility for those unable to avail themselves of the minimal provisions for a good life.

The welfare state involves a transfer of funds from the state, to the services provided e.g. healthcare, education as well as directly to individuals. It is funded through redistributionist taxation and is often referred to as a type of “mixed economy“. Such taxation usually includes a larger income tax for people with higher incomes, called a progressive tax. This helps to reduce the income gap between the rich and poor and can establish some sort of equality between both rich and poor.

In South Africa with its high levels of racial inequality, inequality in income distribution is especially large and persistent. For an upper-middle income country in terms of GDP per capita and economic structure, there are still many people living in poverty.

In its 2012-13 Global Competitiveness report, the World Economic Forum ranked South Africa second in the world for the accountability of its private institutions, and third for its financial market development, “indicating high confidence in South Africa’s financial markets at a time when trust is returning only slowly in many other parts of the world”. The country’s securities exchange, the JSE, is ranked among the top 20 in the world in terms of size. Thus indicates the extent at which South Africa has grown since 1994 up until now.

Since the demise of apartheid in 1994, South Africa’s economic and social status has undergone marked changes. GDP annual growth has averaged about 3.5%, with the years 2004-2007 maintaining a 5% increase annually. Per capita PPP increased from $5700 in 1994 to $9560 in 2007. Measles immunization for children aged 12-23 months grew from 76% to 85%. And finally, the percent of South Africans aged 7-24 who had completed primary school skyrocketed from 77% in 1992 to a reported 100% completion rate in 2004, the last year for which this statistic is available

The fact that more people receive social grants from the state than have jobs has created a flurry of alarm that SA’s welfare spending is unsustainable, given the fear that unemployment could remain persistently high in a low-growth environment. There are many people who not over the age of 18 and therefore are not liable to be taxpayers as of yet and that impacts negatively on the welfare of South Africa.

South Africa is the world’s third largest coal exporter. Mining is only counted for 3% of the GDP. South Africa is well known for their large agricultural sector and is a net exporter of farming products. 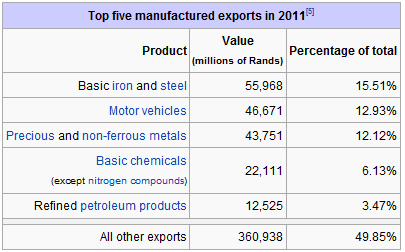 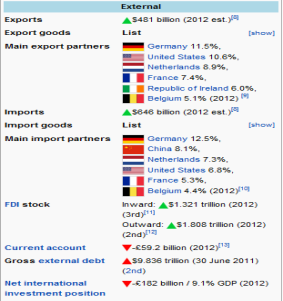 We conclude that Great Britain is one of the most established countries and is much more developed, whereas South Africa is still developing, and slowly emerging in specific areas. Great Britain’s social structure is influenced by class, and South Africa’s is based on racial inequality, and income. Britain’s class is influenced by how wealthy the citizens are. South Africa was ranked second in the world for the accountability of its private institutions, and third for its financial market development, but many of these South Africans are still living in poverty.

Imports and exports in each country, foreign relations, and trading partners.