Climate is changing with the slow and steady pattern. The term Global Warming is referred to the annual average temperature increment of the earth. The average annual temperature of the earth has increased to 0.8 °C since the early 20th century and more than 66 percent of this increment happened after 1980. In this sense, especially in the context of environmental policy, the term climate change has become synonymous with the anthropogenic global warming. In many scientific journals, the term global warming refers to surface temperature increase while climate change includes global warming and everything else that increasing greenhouse gas levels will affect.

Climate Change is a natural phenomenon may change the average weather conditions of any area because of some reasons. These reasons are biotic processes, variations in solar radiation received by Earth, plate tectonics, and volcanic eruptions. It is also observed that humans are also contributing to the climate change by their activities and these activities can cause significant change to the Climate, this phenomenon is called Global Warming.

Change in the annual temperature, rainfall, and wind patterns of an area can cause significant impacts to the plant productivity of any area positively or negatively. Global warming can be a problem for coastal areas where it can cause rise in the sea level and thus may destroy the coastal areas and land. Rise of sea level may also pollute the underground fresh water and people may face water related problems. Climate Change may be beneficial for the lands covered in the ice like Polar Regions through which a large area can be vacated but it may invites some new disasters which would affect the life of humans in other parts of the world.

Environment is a very sensitive system, when something new enters in the environment doesn’t accept it easily because it is holding the whole food chain with it and we humans are also very much linked with this food chain and when one link of this chain is disturbed it would directly or indirectly affect the whole chain. Thus it is very important to keep the chain intact and proper protection to this chain should be provided.

Rise is temperature changes the whole habitat of an area because when temperature of an area rises the wind patterns of that area change because high temperature would make the air hot in the area and the air would move up and a low pressure area would be formed. To fill this low pressure area the airs from surrounding areas will come which will be cold and sometimes full of moisture and it would result in cloud formation and as a result rainfall would occur. But if this process gains more temperature then it would trigger the whole process and thus the climate of the area would be changing.

Agricultural of Pakistan is depending upon two kind of water resources; riverine water and rain water. Rivers are providing water through different canals. Rain is not the efficient source of providing water to the agriculture because it is very scarce in Pakistan and only the northern and western regions receive the amount of rainfall necessary for agriculture. The southern regions such as Sindh, South Punjab and Baluchistan don’t receive the rainfall required for agriculture

There are seven link canals in Pakistan which are substantially important for agriculture in Pakistan these canals are as follow;

These are the canals which being utilized for irrigation purposes and dependency on rain water does not exist.

The second source of agriculture is rain water, playing a substantial role in those areas where there is no river or canal. Rain recharges the ground water in those areas and that water is utilized in the dry season for the agriculture and other uses. In Punjab the high quantity of rainfall is towards the northern areas which are close to the Jammu Kashmir and Khyber Pakhtunkhwa. The average annual rainfall of Northern Punjab is almost 700mm which is because the North Punjab receives two types of rainfall one is through Monsoons coming from the east from Bay of Bengal and the other is through Western winds coming from the Caspian Sea and Mediterranean Ocean

District Gujrat is the North Eastern District in Punjab where it is bounded with the Azad Kashmir from North East, Mandi Bahauddin from the South western side which was once part of this district but after 1996 it was separated from this district, Jhelum from the North Western side separated by the river Jhelum and Gujranwala and Sialkot from the Southern side separated by the river Chenab. It is between two important rivers of Pakistan Jhelum and Chenab which makes it the most fertile land of Pakistan. According to the Indus pact of 1960 both of these rivers were given to Pakistan that’s why the flow of these rivers remains constant throughout the year unlike other rivers of Pakistan which don’t flow during the winter season.

The language Punjabi is being spoken in this part of Pakistan according to the Census of 1998 and 95% of people speak it with following dialects;

Other than Punjabi there are two more languages being spoken in this area which are Urdu and English. According to the 1998 census of Pakistan the total population of Gujrat district was 2,048,008 of which 1,026,000 are males and 1,022,000 are females, with a population density of 642 persons per square kilometer. Over 25.62% of the population was recorded as being urban. 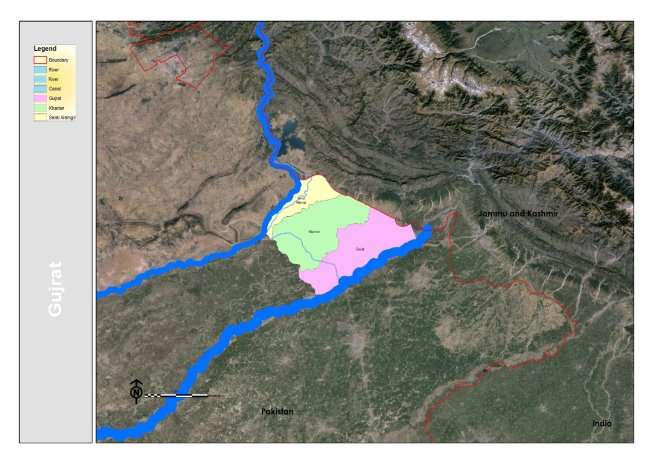 As agriculture is the major source of income among the people of city Gujrat then it is very important to stay safe from any kind of disaster which can damage agricultural prospect of the city suburbs.

Chenab is a major river flowing between India and Pakistan, originates from the upper Himalaya where Indian state of Himachal Pradesh exists, reaches Punjab flowing through Jammu and Kashmir. It has many tributaries which are in Pakistan and also In India. According the Indus water treaty the water of river Chenab is allocated to Pakistan. It enters Pakistan forming a boundary between two districts of Punjab which are Sialkot and Gujrat. It provides water to the Pakistan throughout the year, in winter season the water quantity is decreased while in summer season the water coming as a result of monsoon rains causes floods in the southern Punjab. The flood of 2010 in Pakistan had a lot of contribution from this river.

The average rainfall on the Kashmir border is over 1000 mm, at Kharian it is 750 mm, at Gujrat 670 mm, and at Dinga 500 mm. Gujrat city receives the average annual rainfall of 67cm (670mm) according to the data received from Meteorological department. Summer receives the heavy monsoons which are almost 80 percent of the annual rainfall and winter receives the rest of 20 percent rainfall which is as a result of western winds coming from Mediterranean and Caspian seas bringing moisture with them and release while passing through different regions, when western winds reaches Gujrat they turn almost dry that’s why the contribution of western winds to the annual rainfall is small. The monsoon winds are originated from the east near the Bay of Bengal in the summer season when the Inter-tropical Convergence Zone (ITCZ) pushes to the North after the 21st March of every year. This change of ITCZ create a lot of low pressures in the regions and it also helps evaporate enough water from the ocean. Forming of different low pressures attract winds from the surrounding areas so these monsoon winds starts moving towards these low pressure areas and this is how they reach Gujrat at the end of month of June and start the rains which are sometimes disastrous for crops because of excessive rainfall or lateness of rainfall commonly known as failing of the monsoon rains.

Visible portion is composed of three important rays having wavelengths from 0.4 to 0.7μm and are termed as Blue, Green and Red. These rays are the only wavelengths which a human eye can see while all the other wavelengths can’t be seen by the human eye and the spectrum of wavelength is very large.

Normalized difference Vegetation Index is often called NDVI, a technique used to determine vegetation cover of any area through satellite data. Sunlight reaches the earth surface and hit different targets, those targets may include all objects placed on the earth surface. These objects have specific reflectance curve (reflectance values as a result of interaction with the sunlight). Vegetation also have a reflectance curve according to which the pigment in plant leaves, chlorophyll, strongly absorbs visible light (from 0.4 to 0.7 μm) for use in photosynthesis. The cell structure of the leaves, on the other hand, strongly reflects near infrared light (from 0.7 to 1.1 μm). The more leaves a plant has, the more these wavelengths of light are affected, respectively.

Vegetation appears very different at visible and near infrared wavelengths. In visible light (top), vegetated areas are very dark, almost black, while desert regions (like the Sahara) are light. At near-infrared wavelengths, the vegetation is brighter and deserts are about the same. By comparing visible and infrared light, scientists measure the relative amount of vegetation. 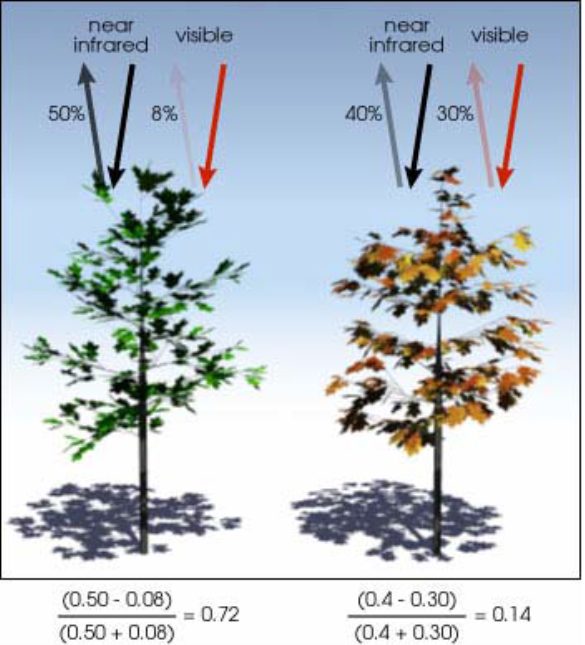 Calculations of NDVI for a given pixel always result in a number that ranges from minus one (-1) to plus one (+1); however, no green leaves gives a value close to zero. A zero means no vegetation and close to +1 (0.8 – 0.9) indicates the highest possible density of green leaves.