Increased levels of car ownership – is it driving places to the point of no return?

In the past century, the car has become an everyday essential item for increasing numbers of people globally.

There are 5 people in my house and we own one car. It has a diesel engine, and it is used for the school run every Monday to Friday. My dad then takes the car to Wolverhampton to work. He uses more fuel travelling 6 miles in the town to drop me and my brothers off at our schools and my mum at work, than he does travelling 22 miles on the motorway to go to work. The journey time isn’t much different either. 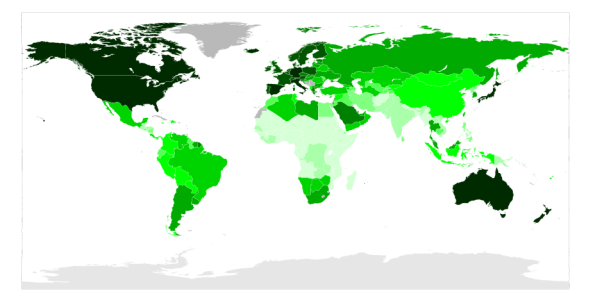 The map shows that in most MEDC’s, there are over 301 cars per capita, whereas in LEDC’s, there are considerably less (mostly <150). As affluence increases as countries develop, the ‘car ownership’ gap will most likely decrease. This might lead to congestion and pollution if not managed carefully.

Map2 (below) from Worldmapper8 shows car ownership levels from a different perspective. ‘Larger than life’ areas e.g. North America, Japan and the UK have high levels, whereas ‘shrunken’ areas have fewer, hence why Africa and parts of Asia are visually smaller than Europe and America. This may be a necessity in some areas eg remote rural areas where public transport links are limited (Cumbria, UK) or a luxury in others, where public transport networks are seamless eg Germany.

Over time, cars have become increasingly common place but can the existing roads and related infrastructure cope with the extreme increase of car ownership? Will the extent of road coverage become over-run in the future? Is it indeed driving places to the point of no return? 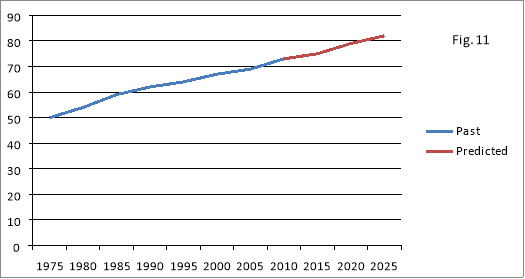 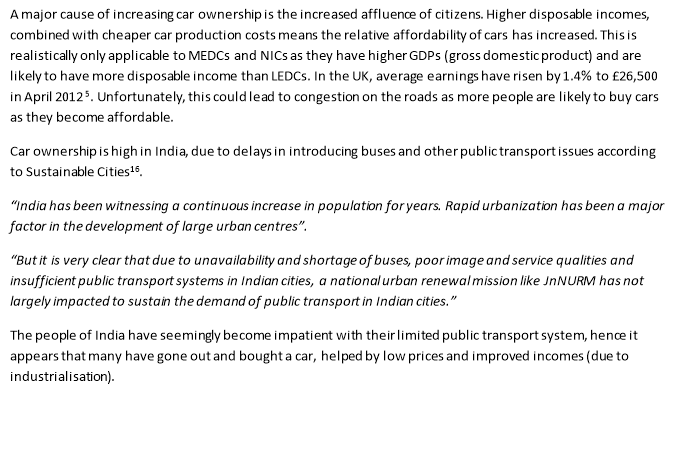 Car Ownership on the increase – what are the causes?

What are the effects of increased car ownership?

The effects of car ownership are beneficial for some, but not for others. Socially, the car is an easy commute, and is accessible to all, regardless to age or height (persons under 17 in the UK cannot drive, however they can be passengers). There are impacts in regard to health, because CO2 emissions in UK cities are too high according to EU rules, meaning potential impacts for those with breathing related ailments.

Economically, the effects are positive because it creates transport related employment; generates income from fuel duty and road tax, which help the UK government to provide a safer driving environment. However, there is a negative effect economically. When a vehicle collides with another, or crashes into property, insurance companies pay for the damage, which costs them a lot of money.

Environmentally, there are only downsides to car ownership; the largest being the emissions released from a cars’ exhaust, and because car ownership is increasing, the problem will only develop and cause more problems, unless car designs improve. Noise pollution is an additional problem. Toll roads also cause environment problems. This is because many are built over green-field land (land not built on) and they are used by a small amount of people in the UK, therefore not only is it bad for the environment, but it’s also a waste of money and land. According to a campaigner for better transport in the UK, the M6 toll has “no net benefit for drivers whilst causing huge and irreversible environmental damage.”11 The M6 Toll carries 55,000 vehicles per day12, out of the 2 ½ million vehicles in the West Midlands. That’s 0.022% of vehicles in the West Midlands per day – that arguably makes it an expensive race track.

Also, oil consumption becomes a problem, especially with the car ownership rates increasing in China: “We project that the total vehicle stock will increase from about 800 million in 2002 to over 2 billion units in 2030. In particular, China’s vehicle stock will increase nearly twenty-fold, to 390 million in 2030. This fast speed of vehicle ownership expansion implies rapid growth in oil demand.”13

Oil is a non renewable fossil fuel. We have gone beyond ‘peak oil’ and will need to find alternatives, potentially this will help the environment. This could be rectified by manufacturing car that use biofuels made of organic matter and other materials, and electric cars. Again, public transport falls into this category, however, in the UK especially, we need to work on the reputation of public transport in terms of cost, friendliness of employees and late arrivals.

Globally, car ownership is increasing; however different countries are increasing at different rates. Map 3 (p6) shows how many cars the country had per 1000 people in 2010.

The map shows that the U.S. has the highest amount of cars to 1000 people and Kenya have the lowest with 24 cars to 1000 people. What I find very surprising from this data is how low China’s and India’s cars per capita is, however I believe this is a good move by China and India from an environmental perspective because of their flourishing economy and workforce, they already emit high levels of carbon dioxide emissions in the world. Having a lower car ownership rate than other countries per 1000 people assists in bringing the amount of carbon emissions down. In addition to this, China is a NIC (newly industrialised country), and so is India, so they may not be able to command such a large car ownership per capita. Because this data is 4 years old, the numbers would have changed. My prediction in 2014 is that the NIC’s (See table below) would have increased car ownership per capita, as their countries are developing and transport is much needed. MEDC’s are trying to reduce the amount of cars on the road due to climate change targets needing to be met, especially the case in the EU. LEDC’s would have stayed the same or increased if more cars are bought or as they begin to become a developing country.

In comparison to MEDC’s and LEDC’s, it is clear that MEDC’s have a higher number of cars per capita than LEDC’s.

The main causes of car levels rising is a population increase. With 7 billion people on the planet now, people want an easy method of transport and the car is the obvious solution for most. If the world’s population carries on increasing at the predicted rate of 1 billion people every approximately 12 years in the world, the effects of increased car ownership could be increased congestion, more grid lock, and an unhealthy effect of the Earth’s climate.

If we look to Germany and Switzerland, their public transport systems are developed and provide an excellent service, as I can say because of personal experiences and comparisons between the UK’s. However it seems that the UK are taking steps forward in improving public transport, as the government have confirmed a £2.7bn deal to build new ‘state of the art’ trains between London and Scotland. UK Transport Secretary Patrick McLoughlin said:

“These new trains will transform rail travel between many of the great towns and cities of England and Scotland. This deal is further proof that our long-term economic plans are on track, creating jobs and breathing new life into the UK’s train-building industry.”

In conclusion, I feel that we need to tempt drivers from their cars and convince them to use public transport or cycle and walk as an alternative. Walking brings health benefits to the individual and in terms of reduced emissions. Car ownership is driving us to the point of no return, we cannot escape that fact, however with careful direction and thought we could ‘turn the corner’ and become more sustainable.

As a result of my research, when I am older and able to drive, I will try to only own one car, two only if it absolutely necessary. This is to help the levels of car ownership stay the same or decrease in my area, helping my and others’ health. Ideally I will live close to work, cutting commuting time and improving the chance of viable public transport use.