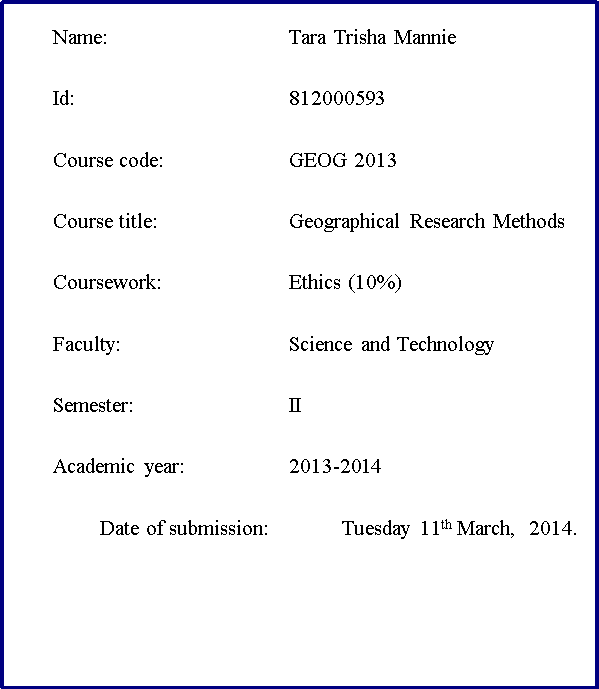 Nazi Experimentations –Testing the effectiveness of sulfanilamide and other drugs in curbing infections.

The persons involved in these experiments, were Human beings. Their privacy was invaded by these Nazi doctors. There was coercion – they did not have a say in terms of what was being done to them. Having battlefield wounds being inflicted, was not a voluntary decision by these people. Since the doctors in Nazi Germany were guided by utilitarian moral principles, they did not need to consider informed consent. Experiments were conducted with no considerations for the wellbeing of the subject from the possibilities of injury, disability, or death. In these experiments the subjects experienced extreme pain, resulting in permanent injury, mutilation, or death. Respect for these subjects in the eyes of the Nazis was not a priority, as they were seen to be “Less-Human.” These people were vulnerable to the Nazis, and to whatever was being done to them. Minimizing harm was not a consideration that was taken by the nazi medics. However, even though it was for the Germans’ benefit, it was torture for the Jewish and Non-German people.

There is no way in which this experiment can be reconstructed to become an ethical process. However, since it was geared towards finding cures for those wounded in battle, what can be a possible suggestion is that, instead of using those innocent people and inflicting battle wounds, the wounded casualties should have been used instead, with consent ofcourse, to find those possible remedies for infections. Another senario, would have been to take blood samples of infected persons, again with consent, and test with appropriate apparatus/equipments to find cures.

Tuskegee Syphilis Study- Learning more about syphillis and its treatment, especially for blacks in the U.S.

This study had good intentions. However, it shifted from helping persons with the disease to becoming a study about the effects of untreated Syphilis on live patients. At the time, the “couloureds” had no access to medical care. This study was more or less based on Deception.

The participants in this study were not informed that they were more or less test subjects, and the doctors were more interested in the results of their autopsies. It is more accurate to say however that they were informed, but rather misinformed, and not notified that the disease they were being treated for was indeed serious and possibly fatal.

“The duration of the experiment was so long that the study violated two laws that were passed since its beginning. The Henderson Act of 1943, which requires the testing and treatment of sexually transmitted diseases, and the World Health Organization’s (W.H.O.) Declaration of Helsinki of 1964, which requires professionals to provide “informed consent” on all medical experiments that researched effects on people (Brunner, 2009). Despite the passing of these laws the doctors involved in the study not only withheld information from these men, but also deliberately misinformed them and prevented them from seeking alternative methods of effective treatment.” (Amaris Joy, 2011)

Willowbrook State School, located in Staten Island, is a school for retarded children, which in 1956, agreed to participate in a research experiment to determine the course of the hepatitis virus and whether or not gamma globulin (a protein complex which contains antigens to provoke the body to produce antibodies) could be used to inoculate children against the virus.

The study planned first to obtain information about homosexual practices in public restrooms and then to conduct further investigation on the men who took part in the acts. The researcher went undercover and gained the confidence of the men by acting as a “look out.” The researcher identified 100 active subjects by tracing their car license numbers. A year after he completed the initial study of direct observation of homosexual acts the researcher distributed a “social health survey” throughout the communities where he knew the subjects lived.

THE UNIVERSITY OF RED BRICKS

Re: Approval report on the research proposal requested by Dr. Geographia.

As an external reviewer of Dr. Geographia’s study of community vulnerability to natural disasters, I have approved the complete protocol, “Strategies of the richest and most famous: Minimizing vulnerability to Earthquakes and other Natural Disasters in Trinidad and Tobago.” The Project is scheduled to last twenty-four months, which includes the areas of Warrenville and surroundings, commencing on May 5, 2014. Dr. Geographia, is very experienced in this area of study, has published in peer reviewed journals, and has many books published in the subject area of natural hazards and risk perceptions.

The protocol involves no special populations in particular, thereby reducing the ethical principle of subject vulnerability. The pupose of the proposed research is limited only to the social elite, being approximately five percent and not to socio-economically disadvantaged groups. According to the proposal read, this study seeks to disclose the resources, networks, and strategies of the country’s wealthiest and apply the results gained to formulate a “trickle-down” mobilization stategy. In emulating society’s elite, this can strengthen the socially disadvantaged in coping with natural hazards. The study incorporates views and community perceptions.Quantitative methods such as blood sampling, laboratory usage, and other sampling experiments and analysis will not be performed. The study is a Qualitative study.

Research material will be obtained through semi-structured interview via researchers within the residents’ homes, taped and transcibed, completed in the participant’s homes for their comfort, in keeping with ensuring research is conducted in the best interest of the society as a whole. The ethical principle of Privacy and confidentiality will therefore not be compromised as the study demands the highest discretions due to the wealth status of the individuals participating. Respect for free and informed consent, will be adhered, since once the participant decides to take part, their verbal consent will be recorded, and therefore a consent form will not be necessary. Data will be collated and analyzed in order to formulate applications to prevent loss and vulnerability among the poorest in the Region.

Her study in no way violates any other ethical principles such as respect for human dignity, confidentiality, justice, and respect for minimizing harm and maximising benefit. No harm is done to the participants in the study. It has minimal to no risks involved. Benefits are obtained, when results are obtained and analyzed accordingly. The proposal is a more or less cost effective study. Whatever expences are required, are thereby funded by Right Hand Left Hand Insurance Group.

A suggestion that I would recommend, is that Dr. Geographia should incorporate in her study, the views and opinions of the Poor. The study should be revised to incorporate the poor, although the main focus is on the social elite. The perspectives of the socio-economically disadvantage will add leverage to her study, and a deeper understanding of their own responces to natural hazards can be contrasted and compared to that of the social elite.