Importance of fieldwork in Physical Geography

The process of observing and collecting data about people, cultures, topographic features and natural environments is considered as the field work. Field work is conducted not only in the wild of our everyday surroundings but also in the semi-controlled environments of a lab or classroom. Generally, field work contributes to help researchers to collect data about the people, species and dynamic places surrounding them. It is the fieldwork which enables the students as well as the researchers to examine how the scientific theories interact with real life. The importance of fieldwork is enormous in both the social and natural sciences. Social sciences deals with economics or history and mainly focus on people, culture, and society while natural sciences, such as biology or chemistry, focus on physical characteristics of nature as well as natural environments.

So, in physical geography fieldwork is a standard method which offers new understandings of physical phenomena that can be obtained most clearly. In this way fieldwork turns out to be a highly enthusiastic means to obtain new interpretations when combined with proper tools and techniques associated with other wide-ranging mapping tools in the geographic information science (GIS science) laboratory like land cover or land shape data as well as digital elevation models derived from satellite imagery.

Sundarban is positioned along the cost of Bay of Bengal in the southern part of Bangladesh covering an area of 272,510 hectares of which 139,500 hectors are in Bangladesh and the remaining 133,010 hectares form the Indian part. The Sundarbans (Bangladesh part) was designated as a world heritage sites in 1997 by the UNESCO. The world’s largest mangrove Sundarbans consist of three wildlife sanctuaries (Sundarbans West, East and South) which are lying on disjunctive deltaic islands close to the boundary with India in the west of the main outflow of the Ganges, Brahmaputra and Meghna rivers. A complex network of tidal waterways, mud flats and small islands of salt tolerant mangrove forests intersected these sanctuaries. During high tides the area is swamped with brackish water that mix with freshwater from inland rivers. Alluvial deposits in this area are geologically very recent and deep. The landscape of Sundarban is dynamic in nature which is constantly being changed due to the combined effect of the monsoon rains, delta formation, flooding and tidal influence.

Sundarban. the largest mangrove forest in the world is an excellent example of a rich biodiversity and ongoing ecological processes. Moreover, Sundarban is illustrious because of its extensive range of flora such as Sundari (Heritiera fomes), Gewa (Excoecaria agallocha), Goran (Ceriops decandra), Hetal(Phoenix paludosa), Kholshi (Aegiceras corniculatum), Passur (Xylocarpus granatum), Hargoja (Acanthusilicifolius), Keora (Sonneratia apetala), Kakra (Bruguiera gymnorrhiza), Kerpa (Lumnitzera racemosa),Nolkhagra (Phragmites australis) etc. though the forest flora in the western Sundarbans is not as diverse as in the east because of the abundance of saline conditions. Moreover, the sunderbans of Bangladsh supports largest diversity of fauna including the famous Royal Bengal tiger, different species of birds, numerous reptiles, and other endangered species, such as the estuarine crocodile and then Indian python. That is why Sundarban is a place of great interest for the researchers to conduct field work. 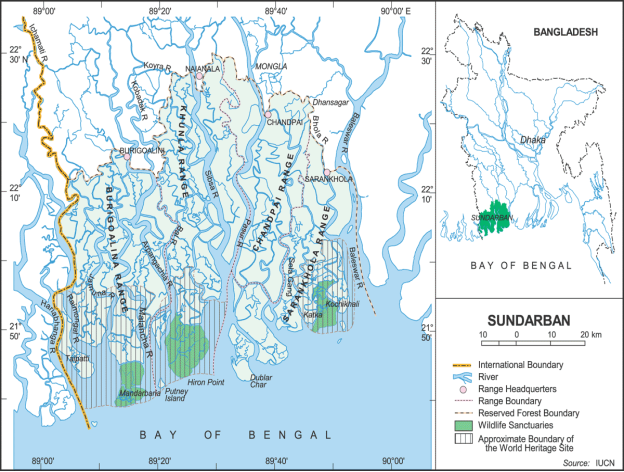 Places of interest in Sundarban during the fieldwork:

Katka is situated at about 100 km from Mongla & about 150km from Khulna city. It is considered as one of the most magnificent spots in Sundarban, where one will see Spotted Deers and Royal Bengal Tiger. This beautiful spot however was severely damaged during the cyclone SIDR. A beautiful sea beach is located on the west of this point and this place is more wild comparing to Hiron point.

Dublar char is located 25 km southwest of Katka and 35 km southeast of Nilkamal (Hironpoint). This is essentially known as the fisherman’s island.

Karamjal is situated in the northeastern part of Shundarban near the Mongla port. It is 107 km away from Khulna city and is a significant eco-truism spot.

Activities during the fieldwork

The journey for Shundarban started in the morning of 9th November 2013 at 8.30 am. The fieldwork started by collecting “soil sample” through “boring” collection of “sediments” by “sediment trapper” and water sample collection near kotka in 10th November, 2013 and ended it by visiting Karamjal tourist spot and collecting of sediments from there in 13th November, 2013. The day to day description of activities during the fieldwork is given below:-

Fieldwork in Sundarban proved to be a quite difficult task in many ways. Some major challenges that we figured out during the fieldwork can be stated as following:

Challenges during the study of soil profiles and lithological Survey: .

Challenges during the study of Wave & Wind measurement and hydrological survey:

Challenges during the study of Biodiversity & Vegetation survey :