Pakistan is a host of several minor and five major faults which runs across it they are due to the previous tectonic events which occurred in this zone the major and most important event which resulted in the formation of the five major faults and is perhaps the reason of minor faults and is sill affecting the geology and tectonics of Pakistan is the famous Himalayan orogeny which itself formed as a result of Indian and Eurasian plate collision in about 20 million years ago because of the continental – continental collision .

Basically Indian plate which was situated within the Australian plate in gondwanaland and started moving towards north in a counter clockwise direction Neo Tethys Ocean was present between Eurasian and Indian plate a segment of this ocean started subducting beneath the Tethys ocean on its either sides/boundaries creating intra-oceanic island arcs due to the northward movement of Indian plate this arc collided with the southern Eurasia forming the continental-magmatic arc suture zone because of this collision folding thrusting occurred forming two major blocks Karakorum block and the kohistan ladakh arc (KIA) separated by MKT Main Karakorum Thrust. During the same time period rest of the Tethys ocean subducted beneath the Eurasian plate which afterwards caused the collision of Indian and Eurasian plate forming Himalayas this again resulted in the formation of thrust faults and fold the first major thrust fault which was formed here was the MCT (its branch in Pakistan is called MMT) this was north wards dipping later on after its formation stresses shifted southwards and another active fault called MBT (Main Boundary Thrust) was formed by the under thrusting of rocks beneath the MCT, Later on stresses shifted further southwards leading to the formation of SRT. 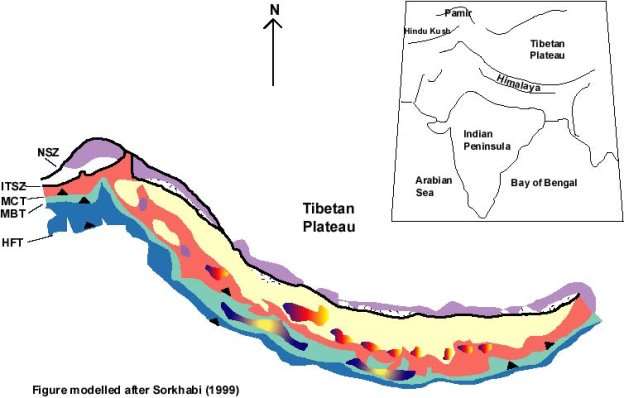 Major Faults of Pakistan are as follows:-

The main Karakorum thrust fault was formed in cretaceous period (Coward et al. 1986) in the result of the collision between Kohistan Ladakh Arc and the Karakoram block about 70-100mya. Later on it was declared as a North Suture (Pudsey et al. 1985.)

It is a regional thrust that is dipping in the north direction and it seperates the Indian plate from the Kohistan Island Arc. Area covered by MMT is 400 sq. km approximately and passes through the districts of Diyamir, Kohistan, Swat, Dir and Bajaur with a total length of 420 miles. It is extended from the region of Khar (Bajaur Agency) in west to the region of Naran in the east. Composition of MMT is more than 15 km thick Proterozoic gneisses and schists (Madin, 1986).

“The Main Central Thrust is a thrust fault which is dipping in a north direction and covers about an area of 2200km along the Himalayan mountain range. This thrust fault was first described by Heim and Gansser (1939) when they noted a contact between terrigenous carbonate rocks and thick overlying metamorphic rocks, mica schists and gneiss (Sinha 1987). It marks the boundary between the higher and lesser Himalayan mountains. It is a longitudinal thrust fault, and in many places is marked by a several kilometer thick zone of deformed rocks with varying degrees of shearing and imbrication (Sorkhabi 1999). Mylonitization and retrograde metamorphic assemblages also occur here. The MCT is the actual suture between Gondwanaland (India) and the Proto-Tehtys microcontinent to the north (Spikantia 1987). Movement along the fault has brought crystalline rock from the Higher Himalayan zone on top of Lesser Paleozoic sediments in the form of klippen in synclines (Windley 1995). These units are called the Outer Crystallines, as noted above on the map. Outer crystalline rocks, garnet and kyanite-bearing, were exposed by slip along the MCT followed by uplift and erosion of 10km of overlying rock (Molnar 1986).”

The Main Boundary Thrust is a different and paramount tectonic peculiarity along the whole Himalayan Belt. The MBT circles around the Hazara syntaxial zone. It speaks to the real zone of late disfigurement and the biggest seismic tremors. The MBT extends from the Afghan outskirt, and can be followed about constantly to the Assam through Eastern India. It is the absolute most strong tremor source in the Himalayas. Islamabadrawalpindi region is spotted at a nearby separation south of the western appendage of the MBT. MBT and MMT are for the most part considered to have distinctive sections while ascertaining the related seismic danger. The hanging wall of MBT carries the pre-collisional Paleozoic and Mesozoic sedimentary and metasedimentary rocks of the Northern Deformed Fold and Thrust Belt and post collisional folded Miocene foreland basin deposits in its footwall.

SRT encapsulates southern edge of Salt range separating the Jhelum and the Indus rivers. SRT terminates in the west against Kalabagh fault and its eastern termination is near the right bank of Jhelum river.

The Chaman Fault is a real, dynamic geographical blame in Pakistan and Afghanistan that runs in excess of 850 km. Tectonically, it is really an arrangement of related geologic blames that divides the Eurasian Plate from the Indo-Australian Plate. It is a physical, essentially change, left-sidelong strike-slip deficiency. The slippage rate along the Chaman flaw framework as the Indo-Australian Plate moves northward (in respect to the Eurasian Plate) has been assessed at 10 mm/yr or more. Notwithstanding its essential change angle, the Chaman deficiency framework has a compressional segment as the Indian Plate is impacting the Eurasian Plate. This sort of plate limit is now and again called a transpressional limit.

From the south, the Chaman shortcoming begins at the triple intersection where the Arabian Plate, the Eurasian Plate and the Indo-Australian Plate meet, which is just off the Makran Coast of Pakistan. The flaw tracks northeast crosswise over Balochistan and afterward north-northeast into Afghanistan, runs just to the west of Kabul, and after that northeastward over the right-horizontal slip Herat deficiency, up to where it blends with the Pamir shortcoming framework north of the 38º parallel. The Ghazaband and Ornach-Nal flaws are regularly included as a feature of the Chaman issue framework. South of the triple intersection, where the deficiency zone lies undersea and stretches out southwest to give or take 10ºn 57ºe, it is known as the Owen Fracture Zone.

While there is general understanding that the shortcoming is slipping at a rate of no less than 10 mm/yr, there is a report of volcanic shakes in Pakistan dated to 2 m.y. BP which have been balanced, for example, to show a slip rate of 25–35 mm/yr. Balances have been depicted all through the flaw in Pakistan that are adolescent enough that “just the alluvium of the base of dynamic dry washes is not removed.”

The parallel mountain scopes of eastern Balochistan, (east to west) the Kirthar Mountains, the Khude Mountains, the Zarro Mountains, the Pab Mountains and the Mor Mountains, are a consequence of the compressional plate limit and are adjusted parallel to the Chaman deficiency development. The issue itself is west of these ex

Some of the minor faults of Pakistan are as follows

It is a critical shortcoming, which runs along NE-SW course and joins the principle limit pushed (MBT) in the Hazara-Kashmir syntaxial zone. It passes north of Islamabad on the southern piedmont inclines of the Margalla Hills. As a consequence of this blame, the Datta development and the Samanasuk limestone are thrusted over the Lockhart limestone. There is no record or evidence of any late development along the Margalla shortcoming.

Punjal push Fault is a noteworthy dynamic tectonic normal for some territorial significance. It likewise included a few fragments. This flaw meets the Khairabad shortcoming arranged on Northern Attock Cherat range. That is why, it is otherwise called Punjal- Khairabad push.

It is a noticeable right-sidelong strike-slip issue which stretches out between Kalabagh and Mianwali. It truncates at the western edge of the Salt Range.

Kurram Thrust is a NNE-WSW inclining north-ward dipping dynamic tectonic peculiarity dividing the Kakar Khorsan Flysh bowl in the north and the west from Bela Ophiolite pushed and fold sash in the east and south.

In Sulaiman range, two left-parallel wrench faults eastern and western edge of the extent have been distinguished. On the eastern side, two faults constitute a left-parallel deficiency framework having Chaudhan fault and Domanda fault. On the western side, there are three N-S trending faults constituting a left-sidelong blame framework. These shortcomings involve Thakht-e- Sulaiman fault, Manikhawa shortcoming fault, and Moghulkot fault.

Kirthar fault is very much a quite prominent N-S inclining lineament on the satellite symbolism. Kirthar fault alongside the other N-S inclining en-chelon fault of the Kirthar reach front and foothills are considered seismically dynamic. Various earthquake epicenters are spotted in this area, which have been connected with this fault.

Orientation of this fault is NE-SW, which is located within the vicinity of Ghazaband Pass Kirdgap region. At some points the fault is concealed under the alluvium. In Southward it combines with Chaman/Oranch-Nal transform fault system.

The trend of Pab fault is NE-SW that is found along the western boundary of Khude fold belt.

Pab thrust is positive seismically and is located N-W of the Karachi.

Hoshab shortcoming is one of numerous significant push shortcomings which partition the Makran locale into a number of push bound pieces. Hoshab deficiency is arranged in the Makan union zone, which is a strongly distorted, east-west inclining overlap and push sash. This shortcoming has an circular segment shape having east-west inclining close to the Nasirabad and Hoshab zones, however eastward it swings to the north-east until it runs parallel to Mashkai rud.

It is one of the active thrust faults .It is trending E-W and found within the vicinity of fold and thrust belts, pertaining to the Makran convergence zone Nai-Rud fault has a NE-SW trending, runs parallel to the Nai Rud valley and bears the left-lateral strike-slip component.

Run of Kutch is a dynamic deficiency of territorial degree having an east-west direction. The augmentations of this fault in the east as well as the west may be, actually, not all that overall characterized. On the other hand, two essential conceivable outcomes have been recommended as such; for east ward expansion, either blame reaches out along the hub of the incredible Run of Kutch or it stretches out to 50 km east of post Sidry, where it bends North-east-ward to take after the geomorphic limit between the Thar desert and the extraordinary Run of Kutch. It is seismically dynamic, which is apparent by a few major and minor quakes related to this local tectonic limit.