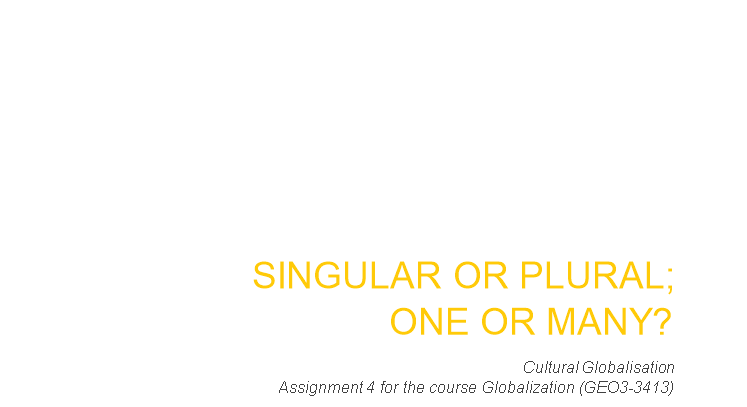 Globalisation has brought changes and has increased global interaction. This growing interconnectedness has led to the movement of ideas, values, ways of living and attitudes across the world. Despite that the interaction between culture and globalisation is not a new one, this process of cultural globalisation has brought forth a relatively recent debate about its outcomes for the world (Hassi & Storti, 2012, p. 3 & 7). The debate revolves around two diverse trends that cultural globalisation can bring, namely if the globalisation is homogenising, or differentiating the world. In line with Nederveen Pietserse (1996, p. 137), these are not the only trends that can be distinguished, but are probably two of the main ones. This paper will therefore focus itself on this debate by discussing both sides and will keep the following question in mind:

Is globalisation cultural homogenising or differentiating the world we live in?

The discussion brings the arguments of both sides to the light and will be elaborated on the basis of some worldwide and local holidays. Subsequently, my own opinion about the matter of cultural globalisation is given in the conclusion to answer the above question.

As earlier mentioned, the discussion will focus on two different views in the debate of cultural globalisation. The two views can be seen as each other opposites. The first that will be discussed will be the idea of homogenisation. Subsequently, the idea of differentiation will be discussed. Both views will be elaborated at the hand of holidays that are celebrated across the world.

The first interpretation of the process of cultural globalization is the idea that as a cause of technological innovation, commercial and cultural synchronisation arising from the ‘West’, the world is becoming more the ‘same’, more standardised and more uniform (Nederveen Pieterse, 1993, p. 265). Homogenisation brings about a world that is becoming overwhelmed by forces making for sameness that is the global standardisation of culture and institutional structures (Robertson & White, 2003, p. 15). This concepts argues that the connections between geographical places and cultural experience are being weakened by the dynamics of globalisation and that the feeling of spatial distance is wearing down (Hassi & Storti, 2012, p. 9).

A key assumption is that of cultural imperialism, the idea that a few Western societies or the society of the United States carry out their culture upon the world (Ritzer as cited by: Kuhn, 2009, p. 56). The transnational expansion of common codes and practices is the cultural element of this process and can be related to the concept of consumer culture. By adopting the Western/American example, cultures and consumption practices are becoming globally more the same (Kuhn, 2009, p. 56). This can also be related to the spread of some holidays. For example, people worldwide buy a rose for their love on Valentine’s Day in February. This (commercial) aspect of this holiday blown over from the Anglo-American world is now part of many cultures in the world. Another example is Halloween. People worldwide dress themselves in costumes and are decorating their houses with pumpkins and cobwebs. Special events are also organised revolving around Halloween, for instance the Halloween Fright Nightsin amusement park Walibi in Biddinghuizen. So in this case, one could indeed argue that some aspects of (western) culture are being spread across the world and are carried out upon other cultures. The same holidays are being celebrated and their practice is the same worldwide.

The second interpretation is the opposite of homogenization. Differentiation assumes that the world is becoming diverse and focuses on the diversification between places. Individuals and groups have influence on globalisation and globalisation copes with and is characterised by a diversity of reactions. The idea rejects that this process establishes a homogenisation of cultures resulting from one way interaction from Western cultures (Hassi & Storti, 2012, p. 7; Kuhn, 2009, p. 58). Also, Ritzer (as cited by: Hassi & Storti, 2012, p. 7) argued that differentiation relates to barriers which prevent flows that contribute in making cultures look the same. Cultures will therefore stay different form each other and cultural differentiation will stay in a globalising world. Practices of other cultures are present in different cultures, but will stay within the margins of local and national cultures. Thus, different global and local cultures will coexist next to each other. Only the criteria that cultural groups use to define their identity and to differentiate from others can change (Hassi & Storti, 2012, p. 8).

The intensification of flows across cultures causes a more inwardly appearing world. Local cultures can indeed be affected by globalisation and its flows, and this can influence the transformation of cultures, but the core of the culture will remain intact (Ritzer, 2010. Cited by: Hassi & Storti, 2012, p. 7). Even so, these multi-directional global flows and world processes do not wipe out local cultures, but they modify some of their characteristics and strengthen others (Hassi & Storti, 2012, p. 8). The strengthening of some characteristics can come hand in hand with an attempt to differentiate from the global or a form of resistance against the forces of globalisation (Kuhn, 2009, p. 59). Link to this, the fact that Valentine’s Day is banned in the Middle-East since 2008, because it does not fit in the Islamic world (BBC News, 2008). Also, cultural groups will react differently to these forces and will develop differently, different environments ask for different efforts to adapt.

Just like that there are holidays that are global, there are also national and local holidays. For instance, only in the Netherlands and Belgium people celebrate ‘Sinterklaas’. Even with the debate revolving around ‘Zwarte Piet’ and reactions from other countries, a lot of people in the Netherlands embrace the holiday as part of their culture. Reactions were mixed, when it came to the public attention that the UN, a global institution, came to investigate this cultural heritage for racism in 2013, which even strengthened the will for some to celebrate Sinterklaas even more. Another holiday that connected to a culture is the celebration of New Year in the Asian world. Instead of the first of January, many Asians celebrate New Year according to the lunar calendar. Or another example, Thanksgivings Day in Northern America. These examples show that despite the flows of globalisation, some holidays do not cross over and are related to specific cultures, because of the deep historical roots and context. So, globalisation cannot fully eradicate a culture and its core features which characterises it and does not always spread certain cultural aspects out across the world.

In my own opinion, cultures can be seen as dynamic and therefore undergo certain changes over time and are exposed to external forces. Globalisation, time-space compression and technological innovation have made global interaction easier and, thus, interaction between different cultures is taking place. Indeed different characteristic of cultures, mostly Western, are being copied al around the world and some facets in cultures are becoming the same, look at Valentine’s Day or Halloween. So, there are indeed some homogenising effects of globalisation.

But my opinion is also in line with what Hassi & Storti told, namely that the core of cultures will not let itself as easy influenced. A culture can be seen as concentric circles. The outer rings of a culture can be influenced easier, like some consumption patterns, but this is different for the core. Some aspects are not so easy changed or blown over to others, because they are historical rooted and/or do not fit in other cultures, like Sinterklaas, New Year in Asia or Thanksgiving. There are still cultural differentiations in the world. Thereby, I reason that just like cultures differ, their reactions on aspects of other cultures also differ. Aspects that are recognisable and stand close to their own culture will be embraced, but other aspects can be cast away. People can influence globalisation and there is, like Kuhn said, a diversity in reactions. In this way globalisation can be seen as ‘the wind’ in a Chinese proverb, and when it blows, some build walls, while others build windmills (European Commision, 2013).