Located in southern Ontario on the south-most shores of Georgian Bay, Grey County has often been identified as a popular tourist destination because of its endless geological landmarks, ideal climate and ample bodies of water. The area encompassed by Grey County (as seen in Figure 1.1) has been found to have a population of 92,568 and covered 4513.21 km2 of land in 2011 (#### statscan). The county was established in 1852 with its headquarters at Owen Sound (Marsh, 1931), and quicly became a major trade hub due to its plentiful natural resources which included forests, fish, fur, and minerals, leading to the establishment of sawmills, furniture factories, quarry’s and apple orchards (grey web####). In recent years, the physical-geographic landmarks have had a great influence on tourism in Grey County. In 2008 the County hosted over 1.779 million visitors, brought in over 331 million dollars in expenditures, supported over 3200 jobs and contributed 9.9 million dollars to municipal taxes (Action plan, ####). The study was aimed to analyze, understand and provide evidence of the relationship between the physical geography and human activity within Grey County. An analysis of how geomorphology, hydrology and climatology impacted human activity in the County was completed and an understanding of their importance was established.

Due to the specificity of the topic researched throughout this study, the difficulty of acquiring credible and peer-reviewed resources was of high magnitude. The main method of research was using the key word approach on websites to maximize efficiency when searching for scholarly documents. Terms such as “Formation, Niagara Escarpment” were used on scholarly databases to yield specific details about the origins of the Niagara Escarpment. Other terms such as “Grey County, Tourism”, “Grey County, Climate, Hydrology, Geomorphology” and “Grey County, Conservation Areas” yielded sufficient information and reports on the geographical and anthropological aspects of Grey County. Lastly, the use of Statistics Canada, The Niagara Escarpment Commission and County of Grey websites provided statistical, political and historical data about the topic researched. Based on the information compiled by the key word approach it was possible to establish a relationship between the physical geography of the area and its human activity.

The unique geological landscapes of Grey County, which are explained through the science of geomorphology, have been a crucial factor in attracting human activity to the area. Christopherson and Byrne have defined geomorphology as “the science that analyzes and describes the origin, evolution, form, classification, and spatial distribution of landforms” (Christopherson & Byrne, 2009, G.6). The County was found to be located atop a portion of the Niagara Escarpment; recognized by UNESCO as a World Biosphere Reserve, with its origins dating back 430 million years and found to span over 725 km throughout Ontario (NEC, n.d). This particular landscape formation can be associated with an age-old sea that once covered the area and overtime eroded adjacent mountains depositing sediments onto the sea floor (Kreuger, n.d). As a result of lithification, these sediments were transformed into shale, slate, sandstone, dolostone and other sedimentary rocks over millions of years which were then warped and bent by the earths forces, forming the Niagara Escarpment along the rim of the Michigan basin (Kreuger, n.d). The Niagara Escarpment was further shaped through differential erosion by a process called sapping (see Figure 1.2), where the sub-lying soft rock eroded much faster then the dolostone cap rock, leading to mass wasting and the formation of cliff slopes (talus slopes) such as the Blue Mountains (Kreuger, n.d). These mountainous regions of Grey County have promoted the establishment of recreational businesses attracting millions of tourists due to its diversified landscape and limitless year-round recreational activities. Although the steep slopes of the Niagara Escarpment within Grey County have been found unsuitable for agricultural purposes, they have attracted humans who for decades have been using them for their recreational abilities. The geography of Grey County has allowed for summer activities ranging from rock climbing, caving, camping, golfing, fishing, biking, as well as hiking parts of the Bruce trail to winter attractions including skiing, skating, snow shoeing, dog sledding, horse back riding and snowmobiling (Grey County Tourism, n.d a). These human interactions with the geographic landscape have helped establish the importance and understanding of how geomorphology promotes the interaction of humans with their surrounding landscapes.

Grey County has often been associated with mild winters and warm summers which have influenced both recreational activity and the apple growing industry in the area. As defined by Christopherson and Byrne, climatology “is the scientific study of climate and climate patterns and the consistent behavior of weather, including its variability and extremes, over time in one place or region” (Christopherson & Byrne, 2009, G.3). Located in proximity to both Lake Ontario and Lake Huron, the area has been found to experience a humid continental climate with moderate temperatures, cold dry air from the Arctic, moist air from the Gulf of Mexico and dry winds from the Pacific (Brown & McKay, 1974). The area of study was found to have an average temperature and snowfall during winter months of -4.50 °C and 49.7 cm respectively (see Figure 1.3 & 1.5), an average temperature of 18.40°C during the summer months (see Figure 1.3) and a yearly precipitation average of 62.8 mm (see Figure 1.4) (The Weather Network, n.d). The geographic location of Grey County and its climate influenced the apple growing industry during the 1840’s when farmers realized that the large bodies of water; Lake Huron and Lake Ontario, reduced the chances of late spring and early autumn frosts while the surrounding Niagara Escarpment and Beaver Valley acted as a barrier confining warm lake air, creating a climate suitable for apple growing and making it one of the biggest industries in the area (Almond, 1985). The ideal winter and summer climates as well as the geographical landscapes of Grey County have not only attracted apple farmers, but also tourists and new residents because of the vast amount of recreational activities offered during all four seasons of the year. During the winter, residents and tourists have been able to enjoy activities such as skiing, snowshoeing, skating, ice fishing, snowmobiling and hiking due to the cold climates and mass snowfalls combined with the rolling landscapes of the Niagara Escarpment and Beaver Valley. People have also been able to partake in various recreational activities during the spring, summer and fall seasons which included biking, fishing, camping, cave exploring, hunting, swimming and rock climbing (Grey County Tourism, n.d a). The climate within the area of study has promoted settlement for several decades and continues to be a strong factor, in parallel with the geographic landscape, in attracting the human population to Grey County.

The hydrologic activity within the County has been a critical resource in providing clean drinking water and promoting recreational activity but has also been known to cause flood damage during extreme runoff events. Christopherson and Byrne have defined hydrology as “the science of water, its global circulation, distribution, and properties, specifically water at and below the earths surface” (Christopherson & Byrne, 2009, G.7). The area of study has been found to contain a large amount of lakes and rivers, which in conjunction with the hills and valleys have formed the areas three major watersheds: Grey Sauble, Nottawasaga and Saugeen Valley Conservation Areas (see Figure 1.6) (Grey County Tourism, n.d b). As a result, the surrounding lands have provided valuable resources in the form of underground aquifers, which have been used as a main source of clean drinking water for the people of Grey County (Waterloo Hydrogeologic, 2003). The area of Grey County has also been know to experience flooding in the spring months due to the large volume of runoff from winter snowmelt. In late April of 2013, it was found that the combined event of snowmelt and precipitation in the Grey County area was larger then a 100 year summer storm of duration greater than 14 hours, leading to large armounts of flooding, damage and road closures due to unsafe driving conditions (Greenland International Consulting Ltd., 2014). Despite the previously stated risks, humans are still attracted to Grey County because of its vast amounts of lakefront properties, plentiful supply of self sustaining groundwater and hydrology influenced recreational activities. Tourists and residents have been able to take part in various activities such as canoeing the rivers of the County, boating on the Nottawasaga Bay, and fishing both during winter and summer months. This research has proved that humans will seek areas of natural beauty and plentiful resources despite it being prone to substantial flooding, further solidifying how the physical-geographic environment has influenced human population in Grey County.

Grey County has been found to attract human activity do to its geological landmarks, ideal climate and ample bodies of water. Its wide range of hills and valleys shaped by geomorphology, moderate continental climate with cool winters and warm summers as well as the abundance of hydrologic related resources have made Grey County a popular tourist destination for millions of humans annually due the various recreational businesses promoted by these qualities. It is evident by the information provided within this study that human activity within Grey County has been heavily influenced by the presence of its unique physical-geographic phenomena. 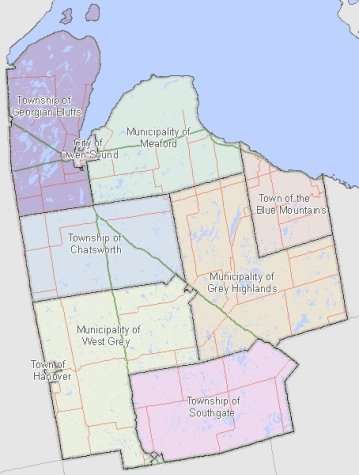 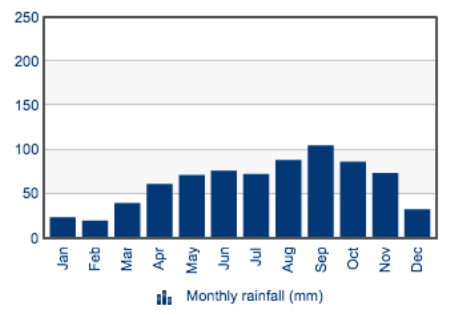 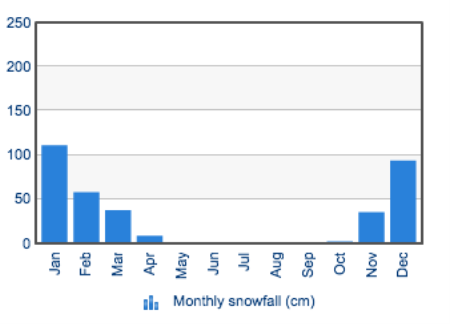 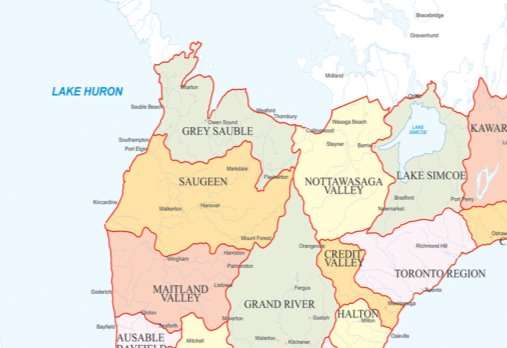 Almond, B. (1985) History of the Meaford and Area Apple Industry. Unpublished history available at the Meaford Museum and Meaford Public Library.