This assignment is about increasing inequality and its impact on low income communities. Measurement of the distribution of income that between individuals or households, making most of the income in a given country and those making very little. I will give out the real example and real cases refer to the Malaysia. Answer the entire assignment question.

According to the scenario income inequality increasing in US due to the various variations particularly the high impact of technology involvement in different sectors. The sudden technological development brings the big gap between high income communities and low income communities. According to the census reports income inequality is decreased during 1947 to 1968 by7 .5%. Whereas during 1969 to 1009 the trend is different so this is the big trend due to the technology growth in various sectors (Bligh, & Philip, 2004)

Labor market situation is one of the cause because products producing with high technology so that organizations provided high wages opportunities. This technological change trend is due to global competition affect so there is a big variation in wage systems in Malaysia (Peel, & Jeffrey, 2008)

Muziliza, (2012) Malaysia putrajaya must stop being in denial about wealth inequality and realise that hardship and poverty are also fuelling corruption, said the Sultan of Perak, Sultan Nazrin Shah, he said the low earnings of a vast majority of households and noted that those struggling to make ends meet were exposed to petty corruption.

Imbalances and inequality that have resulted in the past, persisted over time, or even taken different shapes and sizes, is very much felt on the ground, even if we don’t know enough to call it “inequality” the same way inequality is studied by academics and policy makers across the globe.

The community organizers role is important to understand (Wilkinson, & Harry, 2010) growing issues. Because the organizers must be supports to the governments to organize a schemes, programs and other method to supports the low income community groups. (Stephen, Robbins & Neil Barnwell, 2006)

Community organizers also change the environment by understanding individually, group so that it brings big changes with support of government policies and regulations. So the major requirement is education as a prime development for low income group (Peel, & Jeffrey, 2008)

3.1 To know about the impact of these changes?

As per the scenario the community organizers identify the issue clearly develop proper plan to solve the impact on the changes. Even though the manufacturer provided proper resource to retailing the workforce but the wage impact is an issue so the agencies as well as organizational authorities must be implement to support work force in terms of cost of living by providing subsidy system.(Wilkinson, & Harry, 2010)

The manufacture authorities are the responsible to support workforce wage imbalance for living style so that must provide proper discount price products for workforce. In addition to that encourage the workforce to increase production by issuing incentives (Gentle, & Michael, 2011)

3.2 what is being done to address?

Community organizer also identify the current situation in U.S on the gap to solve by proper organization authorizes implementing support systems through organizing a special trainings to improve towards technological skills so that it will helps to the low income community groups.

U.S government are the major responsible to raise of income inequality, so the authorities must identify the strategy of income distribution, identify the labor mobility, identify the technology change like skills based approach identify the high income group inequalities and inequality geographically as shown in Figure 3. 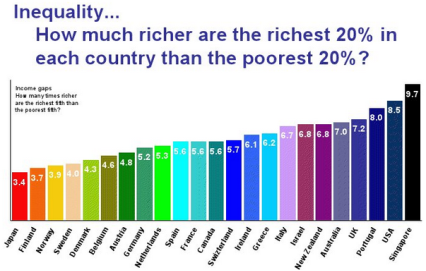