In recent years, shale gas has become the notorious poster child of the fossil fuel industry (Sovacool, 2014). Proponents tout it as being the answer to current energy needs given that it is available in abundance and has a lower carbon footprint than other fossil fuels e.g. coal and oil (Sovacool, 2014). Contrary to this, opponents have a firm stance against shale gas development, having concerns about its environmental impact. Shale gas has come under fire once again as a link between fracking and earthquakes has stirred up public emotions (Walsh, 2014).

There has been a dramatic increase in the number of seismic events in the central and eastern regions of the United States. The US has seen over 300 earthquakes of magnitude 3.0 on the Richter scale over a period of three years (2010 to 2012) in comparison to an average of 21 events per year over the last three decades (Ellsworth, 2013). In several states such as Oklahoma, Colorado, Texas, Arkansas and Ohio these increased seismic events have been linked to underground injection of waste water from shale gas developments (Ellsworth, 2013). In the United Kingdom hydraulic fracturing at Preese Hall near Blackpool has been linked to two earthquakes of magnitude 2.3 and 1.5 on the Richter scale (Green, Styles & Baptie, 2012).

There are a number of procedural steps required for shale gas development that include the following: road and well pad construction, well drilling, casing, perforating, hydraulic fracturing, completion, production, abandonment and reclamation. This essay focuses on the underlying potential of hydraulic fracturing and underground waste water disposal to trigger seismic activities.

Despite seismic activities being recorded at only a handful of the numerous shale gas development sites, the evidence indicates that increased seismic activity can be linked to shale gas development (Ellsworth, 2013). Even though the magnitude of these earthquakes are on the scale of being nuisances rather than catastrophes (Sovacool, 2014), there is a growing interest into understanding the cause of these events and the mitigation strategies to avoid larger catastrophes in terms of earthquakes or surface damage.

Induced seismic events are earthquakes triggered by human activity such as injecting fluids into rock formations for waste water disposal and hydraulic fracturing (National Research Council, 2013). Induced events have a much smaller magnitude than naturally occurring events and are therefore not usually felt on the Earth’s surface (Davies et al, 2013). Induced earthquakes take place when changes occur in the pore pressure-the pressure of fluid in the pores and fractures of rock-due to injection or withdrawal of fluids from the Earth’s subsurface. This change in pressure alters the stress on nearby faults, causing them to slip creating a seismic event. There are many factors that contribute to the magnitude and likelihood of an induced earthquake which include the injection rate, fluid pressure, fluid volume and injection duration (Davies et al, 2013). Since there is no physical difference between naturally occurring earthquakes and induced earthquakes it is difficult to determine the origin of a seismic event (National Research Council, 2013). A study conducted by Davis and Frohlich (1993) proposed criteria that have to be met in order to consider an earthquake as induced. These are:

1. Are these events the first known earthquakes of this character in the region?

2. Is there a clear correlation between injection and seismicity?

3. Are epicentres near wells (within 5km)?

4. Do some earthquakes occur at or near injection depths?

5. If not, are there known geologic structures that may channel flow to sites of earthquakes?

6. Are changes in fluid pressures at well bottoms sufficient to encourage seismicity?

Based on these criterion the seismic activity in Dallas Fort Worth, USA was attributed to disposal of waste water from fracking activities (Frohlich et al, 2010) and the earthquakes at Preese Hall, UK were linked to hydraulic fracturing (Green, Styles & Baptie, 2012). 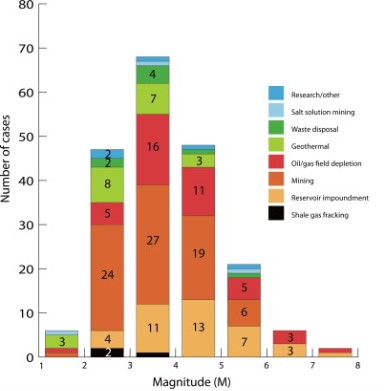 3. Seismic activity due to hydraulic fracturing

Hydraulic fracturing is the technique used to extract gas from ‘shale rock’ formations. Shale rock has large quantities of methane which are trapped in it due to its low permeability (The Royal Society and The Royal Academy of Engineering, 2012). In order to release the gas, fracking fluid is injected at high pressures to create fractures, increasing permeability of the rock and allowing gas to flow out.

Micro-seismic events (less than magnitude 2 on the Richter scale) are often associated with the creation of faults in hydraulic fracturing, however their magnitude is too small to be felt on the surface (Davies et al, 2013). In the event of the presence of a pre-stressed fault near the fracked well a larger seismic event can occur although its magnitude will have an upper limit of 3 on the Richter scale (Green, Styles & Baptie, 2012). The magnitude of induced seismicity is directly proportional to the surface area of the fault and degree of stress on the fault (The Royal Society and The Royal Academy of Engineering, 2012). The magnitude also depends on the pressure in the well, which is determined by the following factors (The Royal Society and The Royal Academy of Engineering, 2012):

The importance of controlling the well pressure can help mitigate seismicity, as seismic events have occurred only at wells where large volumes of fluid have been injected with little or no flow back leading to pressure build up (de Pater & Baisch, 2011).

The seismic activity observed at Blackpool, UK was linked to the hydraulic fracturing operations underway at Preese Hall due to spatial and temporal correlation (Green, Styles & Baptie, 2012). Eisner et al (2011) conducted a study to look into the reasons behind the earthquakes, which concluded that the earthquakes were caused by injection of fracking fluid directly into an adjacent fault. The fluid injection had changed the pore pressure, reduced stress on the fault and caused it to slip resulting in a series of earthquakes. The earthquakes were also measured against the criteria suggested by Davis and Frohlich (1993) to determine whether they were induced or natural events (Eisner et al, 2011):

The table above shows that the criteria were met and hence the events at Blackpool were classified as having been induced by hydraulic fracturing activities at Preese Hall.

The implementation of these mitigation strategies would help operators assess location of faults before fracking, monitor seismic activity and stop even if minor tremors occur.

Waste water is a by-product of fracking and is often disposed of by being injected, under pressure, into disposal wells. Waste water injection increases underground pore pressure and weakens nearby faults, lubricating them, and causing them to slip resulting in an earthquake. The magnitude of induced seismic activity from waste water disposal is larger than that of fracking because it involves injection of larger volumes of fluid over a timespan of months or years (as opposed to a few days for fracking) causing greater pressures to build up (The Royal Society and The Royal Academy of Engineering, 2012). The upper limit of magnitude of seismicity induced by disposal in 5 on the Richter scale (Majer et al, 2007).

In the USA links between waste water disposal and seismicity were drawn when a cluster of earthquakes were noticed in the Guy-Greenbrier area of Arkansas. Since the first disposal wells became operational in April 2009 this area experienced an increase in the number of magnitude 2.5 (or greater) earthquakes, with one in 2007, two in 2008, ten in 2009 and fifty four in 2010 (Horton, 2012). Horton (2012) reports that 98% of the earthquakes occurred within 6 km of one of the disposal wells, began post-injection, increased when the rate of injection increased and tapered off when the well was shutdown. After an extensive study of the area it was noted that the waste water was being injected into an aquifer from where it increased pore pressure on an unknown fault triggering the earthquakes (Horton, 2012).

Similar activity was observed in the Dallas Fort Worth area, where 11 ‘non-felt’ (magnitude less than 2 on the Richter scale) seismic events were recorded during the period between the 20th of November and 2nd of December 2008 (Frohlich et al, 2010). The epicentre of all 11 events was less than 0.5 km away from a disposal well thereby causing them to be classified as induced seismic events (Frohlich et al, 2010).

Out of the thousands of disposal wells in the US only a handful have displayed seismic activity (Frohlich et al, 2010). The reason for this could be that most of the wells are drilled into porous, permeable rocks suitable for accommodating fluids and that injection induced triggering occurs only if the fluid reaches a favourably oriented fault (Frohlich et al, 2010).

The Royal Society and The Royal Academy of Engineering (2012) have suggested steps that could be taken to mitigate the seismic activity due to waste water disposal:

1. Injection into active faults and brittle, non-porous rocks should be avoided

2. Pressure changes at depth should be minimised by reducing volume of fluid to be disposed. This could be done by building more wells to accommodate smaller volumes of fluid or injecting into highly permeable rocks.

3. A ‘traffic light monitoring system’ should be deployed to respond to seismicity.

After analysis of data from shale gas plays in the US and UK it can be concluded that shale gas development is responsible for the increased seismic activity felt in these regions. It must be noted however that most cases of seismic activity had magnitudes well below what could be felt at the surface (Davies et al, 2013). According to the National Research Council (2013) hydraulic fracturing does not pose a high risk for inducing seismic activity while disposal of waste water into underground wells poses a greater risk due to the injection of larger volumes of waste water for longer durations of time. However, of the 30,000 wells in operation in the US, only 3 wells have displayed ‘felt’ seismic activity (Davies et al, 2013).

A balanced approach should be taken while addressing this matter as other human activities (mining and oil recovery) are responsible for far greater incidences of induced seismicity (Davies et al, 2013). In order to allay public concerns and reduce risks associated with seismic activity the government should enforce certain regulations e.g. geological assessment of rock system at well site, deployment of ‘traffic monitoring system’, limitations on volume and rate of fluid injected and limitations on the proximity of wells to active seismic zones or critical facilities (hospitals, schools, nuclear power plants etc.). Coordinated efforts should be made between the government and industry to put in place a mechanism to respond to induced seismic events and gather comprehensive geological data from shale gas development sites to better understand why, how and where these events occur.

Eisner,L.,Janská,E., Opršal,I.,Matoušek,P. (2011) Seismic analysis of the events in the vicinity of the Preese Hall well. Cuadrilla Resources Ltd.