Compare and contrast the impacts of volcanic eruptions on urban communities in pre industrial and post – industrial evolution societies.

The industrial revolution refers to a period in history that roughly occurred between 1760 and 1840, which saw the transition from old to newer manufacturing processes. It is regarded as a major turning point in history, influencing most aspects of daily life, even today. The revolution saw a change from traditional hand production to the use of more modern tools, machines and new technologies. Technology became more advanced and its use became more significant. Gaillard (2007) suggests that pre industrial revolution societies, like those discussed in this essay had a more intimate relationship with the natural environment, which plays a key role when assessing the impacts of a volcanic eruption.

In this essay I will firstly compare the impacts of a pre and post industrial revolution eruption of Mount Vesuvius. Their impacts on urban communities will then be discussed in comparison with the more recent eruptions of Eldfell in Iceland and the Soufriere Hills volcano in Montserrat. For the purposes of this essay urban communities will be defined as a substantial group of buildings or people in one area. To assess the impacts of a volcanic eruption on an urban community, the nature of the community will need to be considered. Impacts of the eruption will vary between communities depending on a number of factors including closeness to the eruption, infrastructure, transport links, predication and preparation and the overall development of the community (Marzocchi et al., 2004). Different types of volcanic events will also produce different types of hazard (pyroclastic flows, tephra fallout, and gas emissions) which also need be considered in the assessment of a volcanic eruption.

Mount Vesuvius is located in a densely populated area, with thousands of people living on its flanks and in the immediate vicinity of the volcano (Marzocchi et al., 2004). In the past Vesuvius has produced several large eruptions, including the most well known eruption which destroyed the town of Pompeii in AD79. This was a VEI5, Plinian eruption that consisted of two stages. Usually Plinian eruptions are classified by three stages; an initial eruption phase with a sustained eruptive column of gas and pyroclastic material; a second phase in which the eruption column collapses and generates pyroclastic flows which could reach speeds of up to 100km/h and finally the generation of dense, rapid mudflows generated by water on steep slopes (Barberi & Zuccaro, 2006). In the case of the Vesuvius eruption in AD79 only stage one and two occurred. There were no mudflows, only pyroclastic flows. (Lirer et al., 1973).

The eruption produced a 32km high eruption column and extensive tephra all out south of the eruption resulting in accumulation of tephra 2.8m thick over Pompeii and other regions (Sigurdsson et al., 1982). Sigurdsson et al (1982) presents evidence to support the collapse of roofs under the weight of pumice that fell and consequently the destruction of infrastructure throughout the town. The tephra fall would also have made it very difficult for people to be outdoors around that time. The town would have been in total darkness and they would have had to wade through several metres of tephra on the ground. Despite this, this first stage of eruption was non lethal. It alarmed people but gave the majority of the population time to flee. 2000 deaths were accounted for out of the 20,000 people living in Pompeii and neighbouring towns (Luke, 2013).

The second stage of the eruption consisted of six pyroclastic flows, during which most death and destruction to property occurred. Figure 1 details that between them, six pyroclastic flows travelled from the volcano, covering the towns of Herculaneum, Oplontis and Pompeii. The flows travelled 32km west across the Bay of Naples to Misenum and south east of Stabiae (Siggurdsson et al., 1982). 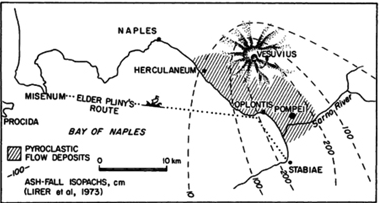 Figure 1. Map of Vesuvius and surrounding towns showing pyroclastic flow deposits and the extent of the pyroclastic flows during the AD79 eruption (Source: Siggurdsson et al., 1982).

The AD79 eruption of Vesuvius is an example of how communities with the most insecurity are the most vulnerable to hazards and have the capability of turning them from hazard to disaster (Gaillard, 2007). Through studies carried out on the settlement of Palma Campania a commune in Naples, Grattan (2006) showed that although most of the population was killed by tephra fall and pyroclastic flows there was reluctance to permanently build a settlement on the volcano plains, suggesting that instead of mitigating the effects of a volcanic eruption the communities instead chose to deal with them. They derived a method of coping and learning to live with the sudden environmental change.

Compare this with the smaller VEI3 eruption of Vesuvius in 1944 and the impacts are very different. Although the eruption was smaller, there was more of an impact on nearby towns because of the nature of the community (Barnes, 2011). Important buildings such as schools and hospitals were built very close to fracture zones on the volcano flanks where open vents had previously been recorded. Under these conditions, living and having important amenities in such close proximity, events smaller than the 1944 eruption could be catastrophic from an economical and social point of view (Marzocchi et al., 2004).

From a comparison of the two Vesuvius eruptions it is evident that the hazards each volcanic eruption produced were similar, however the way the communities chose to deal with them and therefore the impacts of each eruption are different for pre and post industrial communities. With a simpler way of life, post industrial revolution communities towns were able to easily change aspects of their daily life and adapt to living with a volcano. In a way, modern technology could be considered a downfall. If a super eruption were to happen it would apply stress to all aspects of modern day life. Air travel would be practically impossible because of airborne tephra, climate change would be severe and affect crop production across the globe, telecommunications would be restricted and huge areas would be affected by tephra fall and toxic gases (Grattan, 2006). Although that is a worst case scenario it highlights how post industrial revolution or modern communities may not always be better off.

The eruption of Eldfell began, without any warning, on the 23rd of January 1973, as a fissure crossing the island (Morgan, 2000). It caused a major crisis for the island, almost causing permanent evacuation. Volcanic ash fell on most of the island and more than 400 homes were destroyed as roofs were not constructed to deal with the weight from ashfall. Tractors were used to remove ash from the roofs and save some of the buildings (Morgan, 2000). Figure 2 shows the town of Vestmannaeyjar during and after the eruption and gives an idea of the scale of damaged caused by the eruption. It was most at risk because of its close location to the volcanic fissure. It was threatened by tephra fall and lava flows (Thorarinsson et al., 1973). The lava flows that threatened the towns also threatened the harbour, the islands main source of income. The response to the lava flows was to spray them with sea water, which cooled them down and stopped further advance, saving the harbour (Morgan, 2000).

Figure 2. Houses nearest the fissure were destoryed by volcanic bombs thrown from the volcano during thr eruption (Left). The right image shows the town of Vestmannaeyjar after lava had advanced onto it. Cooling hoses used to cool the lava are highlighted in red. (Source: Morgan, 2000)

Although the scale of the Eldfell eruption was relatively small, the town of Vestmannaeyjar was put at risk because of its location of the fissure. The fissure opened up at the edge of the town with the lava destroying 200 buildings, and more being damaged by tephra fall (Dugmore & Vésteinsson, 2012). Despite this the death toll for the Eldfell eruption was low as there were resources and space to evacuate those in immediate danger. Boats transported people off the island to Reyjavic where schools and other larger buildings acted as receptions for the evacuees. Compare this with the Pompeii eruption where the resources were unavailable and lack of knowledge made evacuating people not an option. Even if the resources were available, it would have been physically impossible to relocate such a large population.

In Iceland, volcanism is considered to be one of the principal causes for lack of development (Dugmore & Vésteinsson, 2012). In most cases, the negative impacts of a volcanic eruption have been kept to a minimum both by environmental and cultural factors. There is little to encourage people to settle in immediate volcanic zones; high elevations are unfavourable in terms of climate and the steep slopes of the volcano flanks are difficult to build on. Social systems within Iceland are well suited to coping with volcanic hazards so when an event does occur it will not have such a great impact as if it were to occur in Britain for example (Dugmore & Vésteinsson, 2012). 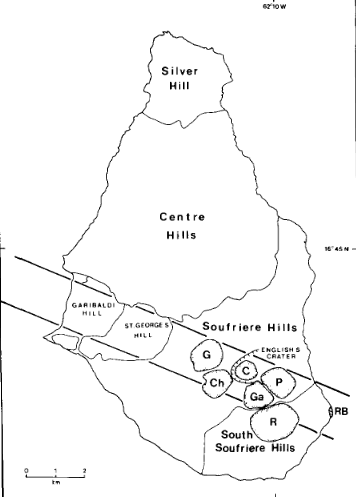 Chances peak was responsible for the eruptions from 1995 onwards (Figure 3). The eruption began in 1995 after a period of seismic activity and small warning signs of an eruption (Robertson et al., 2000). The most intense eruptions occurred in 1997 and consisted of pyroclastic flows, lahars and tephra fall. The advancement of tephra and pyroclastic flows and the settlements around the volcano that were destroyed throughout the eruption is shown in Figure 4. 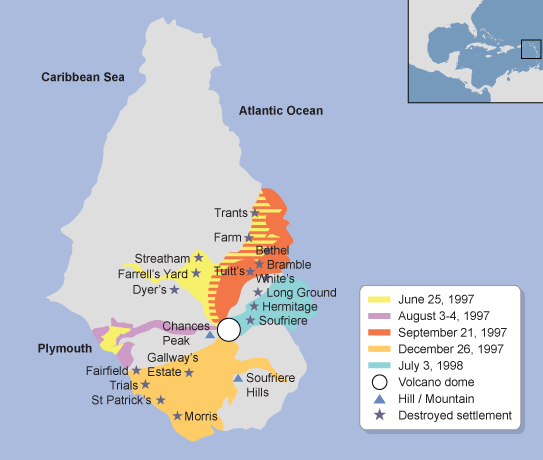 Figure 4. Chances Peak and the location of nearby settlements. Shows the progression of the eruption during 1997 to 1998 and depicts the settlements that were destroyed by pyroclastic flows, lahars and tephra fall. (Source: BBC Bitesize)

Through recognition of distinctive patterns in seismic activity and monitoring signals, short term forecasts of volcanic activity were able to be made so those most in danger could be evacuated at the most appropriate time (Robertson et al., 2000). The islanders in close proximity to the volcano were evacuated to the north of the island, to neighbouring countries and to the UK as Montserrat is a British dependant territory (Young et al., 1998). In total, only 19 people who chose to stay behind were killed by the eruption. The Soufriere Hills volcano provided an opportunity for modern technology and volcanological thinking to be fully utilised in the thorough documentation and the provision of accurate and timely disaster mitigation advice (Young et al., 1998).

To conclude, the nature of a volcanic hazard, the social status of the population exposed to the hazard, geographic setting and the rehabilitation policy set up by authorities vary between time and place (Gaillard, 2007). In the cases discussed above, all the eruptions produced similar hazards (tephra, lahars, pyroclastic flows) but the nature of the community and the way the population responded made the impacts different. Post industrial revolution communities use technology to their advantage in aiding after the eruption but also before the eruption, in the prediction and preparation stages.

From the case studies, it is evident that forecasting plays a fundamental role in volcanic hazard mitigation (Sparks, 2003). It is vital for predicting when/where eruptions will occur, the kinds of hazards associated with the eruption, how long the eruption is likely to last and if populations in close proximity to the volcano are at risk. Plans can then be put in place to reduce the risks related to an eruption on a community.

Gaillard, J.-C. (2006), “Traditional societies in the face of natural hazards: the 1991 Mt Pinatubo eruption and the Aetas of the Philippines”, International Journal of Mass Emergencies and Disasters, 24(1), pp. 5-43

Grattan, J. (2006). Aspects of Armageddon: An exploration of the role of volcanic eruptions in human history and civilization. Quaternary International, 151(1), pp.10-18.