In an urbanizing world, discuss the value of green and blue spaces in towns and cities and describe some of the approaches being used to improve access to nature.

50 years after Henri Lefebvre identified seeds of planet ‘Trantor’, Isaac Asimov’s (1995) completely urbanized science fiction planet, amidst the Earth’s urbanization (Merrifield, 2013), 54% of global population today are urban dwellers, and it is projected to increase to 66% in 2050 (United Nations, 2014). Lefebvre’s prognostications are coming true at a staggering pace. Such booming population growth in cities and towns puts immense pressure on ever-shrinking urban spaces. In light of competing land use, the frantic pursuit of economic prosperity and social advancement has neglected urban green and aquatic environments. Many remain incognizant of the importance of nature and its access within increasingly concretized landscapes. The benefits and detriments of urban green and blue spaces will be explored using a multi-dimensional approach considering various aspects of urban nature’s importance.

To begin with, from the perspective of well-being, green and blue environments satisfy a fundamental human need for a conducive environment. Human evolution theory suggests that modern humans have developed a certain genetic inclination to respond positively to habitat settings favourable to survival and well-being of their ancestors (Kellert and Wilson, 1993). These responses are believed to be triggered when immersed within nature. As such, the restorative effects of nature seem to serve as ‘natural tranquilizers’ amidst the urban hustle and bustle (van den Berg et al., 1998). For instance, Ulrich (1984) discovered that hospital patients with the opportunity to look out onto greenery recovered much quicker from surgery than those whose views were confined to buildings. This reflects the recuperative influences of green spaces on well-being of urban dwellers. Further research also strengthened evidence of restorative sounds and visual properties of water and waves within aquatic spaces (White et al, 2010). The array of physical and spiritual healing functions of natural environments provide the basis of human needs that make cities and towns liveable.

Moving on, from a social paradigm, natural environments within urban localities can facilitate social progression by allowing people to seek emotional refuge while providing valued recreational space. ‘The free world of the public park has always evolved a pre-lapsarian world of innocence and autonomy’ (Thompson, 2002, p. 66). Indeed, chasing after better lives and getting to places on time have caused personal time to be left behind amidst busy cosmopolitan lifestyles. The serene natural environment is perhaps the only place where one could seek emotional shelter in terms of privacy and self-reflection. In addition to being emotional sanctuaries, urban green and blue spaces represent extended recreational space amidst congested urban environments. Growing urban populations are forcing people to live even closer than ever before as land use becomes competitive. For instance, half of Hong Kong’s population is housed within continuously shrinking living space at approximately 13.4m³ per individual (Hong Kong Housing Authority, 2014). Increasing proximity between humans generates feelings of confinement within countless of man-made walls. Hence, the presence of open green and blue spaces allow urban dwellers to step away from the highly-constrained landscapes of built environments, where there is space for one’s privacy and for forging social relationships free from cramped cities and towns.

While recognising the importance of urban green and blue spaces, it would be myopic to overlook any potential detriments. Although these natural environments are paradise away from stressful urban life, they could also be harbour potential danger. These natural habitats provide ‘wild’ breeding grounds for crime and incivilities, and could ‘be a place of fear and anxiety’ (Thompson, 2002, pp. 66). Research studies revealed that visitors to promenades along the Rhine in Cologne and Düsseldorf, especially women and elderly, were concerned about theft and harassment in addition to issues of victimisation (Völker and Kistemann, 2013, pp. 120). The manifestation of crime and anti-social behaviour creates negative perceptions and feelings of powerlessness that indirectly erect mental barriers for potential nature users.

Apart from the benefits that urban inhabitants enjoy, it is also imperative that we consider the advantages of having urban natural environments within cities and towns. Urban green and blue spaces contribute to the sustainable development of built environments, in both economic and ecological dimensions. Research conducted by White et al. (2010) revealed that combined green and blue environments were most preferred, depicted in Fig 1. 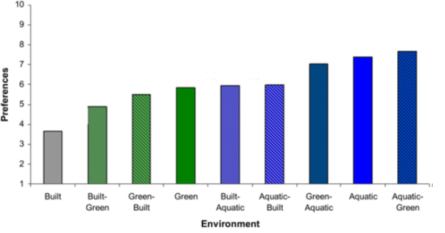 The aesthetic appeal of nature highlighted above translates to higher fiscal revenue and monetary returns for the urban settlement. For instance, people were found to be willing to pay almost 8% to 12% more for housing properties with views of water and green interface across several districts within the Netherlands (Luttik, 2000). In addition, urban greenery also attracts greater influx of foreign investments into cities and towns, exemplified by the beautification of Singapore as a “garden city” that propelled the city’s economic rise (Braatz, 1993). Hence, the presence of green and blue spaces in urban areas create positive perceptions of pleasant environments, which makes cities and towns more alluring in the economic sense.

Furthermore, ecological footprints of urban development could potentially be mitigated. Research has shown that 85% of air pollutants and dust particles can be filtered out in a typical-sized urban park (Bolund and Sven, 1999), In addition, the combined effects of green and blue spaces are also effective in combating the urban heat island effect. Ambient temperatures within Chapultepec Park in Mexico City were observed to be 2°C to 3°C lower than surrounding urban areas (Jauregui, 1990/1991). The presence of natural spaces helps to regulate the urban environment and make cities and towns more hospitable. For any urban settlement pursuing sustainable development, these green and blue spaces may hold the answers.

Growing understanding of the urban nature’s beneficial outcomes and potential detriments has generated renewed focus on making nature more accessible. Different definitions of improving access underpin the myriad of strategies and implementations that have been adopted.

Firstly, the shift in focus towards ‘green infrastructure’ which involves enhancing engineered water infrastructure by integrating nature with urban ‘grey infrastructure’ have become increasingly popular (Wendel et al., 2011). This approach interprets improving accessibility as increasing the distribution of natural spaces. Recent academic literature suggest that we “may have to bring nature to people rather than have people come to nature, especially in urbanized environments’ (Lin et al., 2014, pp. 6). Thus, nature should be incorporated into existing urban infrastructure to raise opportunities for encounters. In Tampa, Florida, converted storm water ponds enhanced with green spaces saw a 35% increase in walking access (Wendel et al., 2011). On the other hand, in South-East London, such incorporation was done through the restoration of a section of river Ravensbourne within Cornmill Gardens by replacing concrete encasements with natural sloping banks and bank vegetation (The London Rivers Action Plan, 2009). These strategies, combining landscape and water management, mimics natural watersheds to enhance urban hydrology while greatly improving public access.

Another strategy to improve accessibility points towards public education espousing human connections with nature. This approach understands improving access through raising motivation to visit nature. Education theory suggests that ‘biophilia’ (Kellert and Wilson, 1993) and interest in nature are encouraged by early childhood experiences (Stokes, 2006). Removal of such experiences would dramatically reduce one’s motivation to visit nature regardless of accessibility. To illustrate, the Forest Schools Education (FSE) movement was originally developed to develop a greater affinity with nature for pre-school children in Denmark. This Scandinavian concept, now adopted across pre-schools worldwide, develops children’s appreciation of nature through regular visits to natural spaces for play (Forest Schools Education, 2013). Cultivating one’s orientation towards nature through interactive opportunities can therefore develop life-long motivations to visit the natural environment.

Thirdly, improving accessibility by reducing barriers to usage advocates the improvement of public amenities within natural spaces. This approach focuses on creating safe and conducive conditions for public access to nature with a peace of mind. This greatly reduces perceptions of danger and encourages frequent access. In Santa Cruz, Bolivia, over 65% of respondents highlighted safety as the main obstacle that limited accessibility of nature (Wendel et al., 2012). Hence, access to nature can be augmented through improved public amenities and infrastructure to make these spaces safer. In Bogota, Columbia, improving access to nature focused upon heightened security and safety through installing fences, increasing uniformed guard patrol frequencies and improving lighting conditions (Berney, 2010). Thus, safe natural environments would encourage more frequent visits and greatly reduce deterrence of usage associated with perceptions of danger.

Being indispensable ecological assets in today’s urbanizing world, urban green and blue environments deliver an extensive range of crucial functions that cover health and social benefits to ecological and economic goals. Facilitating public access to these ‘lungs of the city’ (Sutton, 1971) through a spectrum of interventions ensure that the opportunities and perks provided by these urban ecosystems help improve the quality of urban life. As planet Earth increasingly resembles ‘Trantor’ more than ever before, we must realize that in order to sustain the development of cities and towns, urban natural environments are a ‘must-have’ rather than a ‘nice-to-have’.

Merrifield, A. 2013. The Urban Question under Planetary Urbanization, International Journal of Urban and Regional Research, 37.3 pp. 909 – 922.

The River Restoration Centre, 2009. The London Rivers Action Plan: A tool to help restore rivers for people and nature, http://www.therrc.co.uk/lrap/lplan.pdf.