THE PERCEPTION OF INDUSTRIAL DISTURBANCES IN NIGERIAN CITIES: A GEOGRAPHICAL APPRAISAL OF BENIN- CITY

The major aim of this research work is to determine the perception of industrial disturbances by Benin City residents. This refers to the disturbances created by the availability of heavy manufacturing industries around residential areas of the city. For this purpose, a total of 158 residents were sampled, to generate the data for this research. Multiple correlation analysis was used to test for the significance between the perception of residents who live close to industrial establishments and those who live far off. This revealed that 58% of residents in the study area perceive industrial disturbance as caused by industries around their neighbourhood, leaving 42% unaware to ignorance, indifference etc. The analysis of variance (ANOVA) statistics and chi-square test were also used. The overall findings of this research bring to the fore the fact that a high percentage of Benin-City residents are not aware of industrial disturbances.

Although the level of industrialization in Nigeria is still very low, its growth rate in the recent past has been significant. This growth rate was largely due to the availability of a large investible capital in the mid 70s (owing to oil revenues) and a growing commitment on the part of government to planned economic growth. Industrial growth is not likely to diminish drastically because of the growing awareness of the need to produce most essential commodities locally and more recently the ban slammed by the Federal Government of Nigeria on the importation of goods, which can be produced locally. Consequently, industrial expansion is likely to continue, in spite of, or even because of the present economic depression.

The industrial establishments arising from these processes are located within the framework of a low level and primate pattern of urbanization. Industries spring up in tens annually and most of these are located alongside residential areas in most state capitals and urban centres where women spend 3/4 of their time engaging in various economic activities (Uchegbu, 1998). Consequently, the few urban centres in Nigeria have tended to be the monopolistic locations of these industries. There are now more than 3,000 industries of various categories in the country with about half of this number located in Lagos metropolis alone (Uchegbu, 1998).

Perhaps, a more compelling reason for examining the mental images or perceptions people hold of the emerging industrial environment in our cities relate to one underlying assumption regarding the attitude of developing countries to environmental issues. The view is widely held that a major concern and pre-occupation in most developing countries is with economic growth and development and that people are indifferent to and place low premium on environmental quality. This attitude arises from a perception that economic growth and environmental quality are mutually exclusive.

Environmental problems/disturbances can be in form of soil erosion, pollution, flood, deforestation, bio-diversity loss, and degradation, quarry and mining problems etc (Adedibu, 1997; Ajayi, 1997 and Odetunde et. al., 1998). Environmental degradation, in general terms, refers to the process that may act to force the condition of a part of the earth’s surface of its surrounding atmosphere to become unpleasant or less useful to man (Akinyele, 2000).

The natural environmental settings covers the atmosphere, hydrosphere, lithosphere and biosphere (Olorunfemi and Jimoh, 2000). Within these spheres are a number of interactions that propelled the different types of human related activities. The term environment literally means surroundings, circumstance or influence (Ajibade, 2000).

Environmental pollution is a diverse problem experienced all over the globe today, this experience cuts across both the developed and developing worlds. In 1985, the Polish Academic of Sciences described heavily industrialized Poland as the most polluted country in the world (Miller Jnr, 1994). Air, water, and soil are so polluted that at least 1/3 of the people risk contracting environmentally induced respiratory illnesses, and a host of other diseases.

Coal supplies 80% of Poland’s energy most of the country’s industrial and power plants have no pollution control technology whatsoever or, at least ineffective controls. Satellite photographs show that the biggest clouds of smokes in Europe hang over southern Poland, partly because large coal burning plant’s have shutdown their pollution control equipment to save power and money (Miller, Jnr, 1994).

Adeoti (2004), stated clearly that, industry has been reckoned to contribute much to environmental pollution in developed countries and much research has been done to proffer technological solutions. So far, work on this area has been largely limited to developed countries. However, there has been increasing advocacy that developing countries need not follow the environmentally unfriendly development path of industrialized countries (Adeoti, 2004).

Aghalino (2000), asserted that the impact of oil exploitation on the oil mineral producing communities are in three folds. First, it leads to environmental pollution. Secondly, it destroys the ecosystem and the ways of life of the people and lastly, the oil producing communities are generally underdeveloped. Jimoh (2000), made a factual assertion on the interaction between man and his environment. “Man is a product of the environment as the latter is also an important component in the life of the former. Thus, protecting the environment of man from destruction is inevitable”. Many industrialists have viewed industrial progress and environmental protection as mutually exclusive, but Odiete (1993), advocates that industrial progress and environmental protection must be complementary rather than mutually exclusive.

Although Benin City has no major processing industries such as oil refineries, iron and steel or metallurgical industries that usually contribute heavy pollution to the ecosystem, there exist nevertheless other industries like pulp and paper, aluminium, breweries, rubber processing, plastic, livestock feeds, non-alcoholic beverage etc, which generate pollutants. Some of these industries produce noise and thermal changes. Plants and heavy machines used in factories/industries make a hell of noise during their production period (Uchegbu, 1998; Ozo, 1988).

Materials and Methods of Study

Averaging model and percentages were used to summarise the data while multiple correlation was used to determine the individual and overall contributions of industrial disturbances in the study area. The analysis of variance was used to examine the variability in industrial perceptions; while the chi-square test was used for testing whether the variables are independent or related. 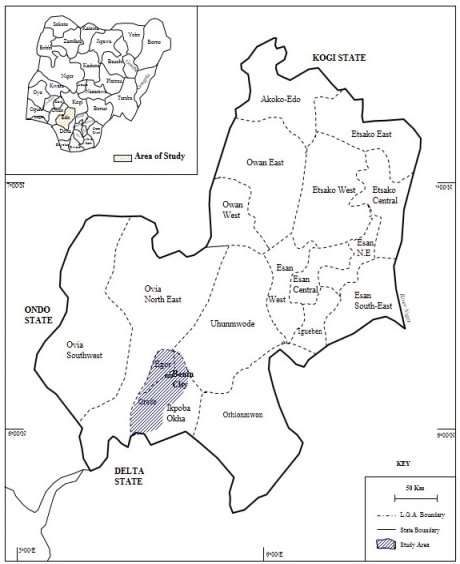 Source: Ministry of Journal of Cartography and G.I.S, (2002) 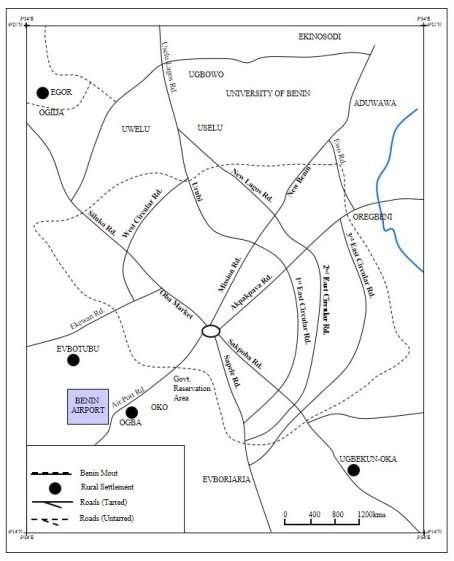 Discussion of Results and Findings

A megre 30.4% of the total respondents are equipped with tertiary education as against a majority of 55.1% of respondents who posses only secondary education. This to a large extent, brings to fore the low level of education in Benin City and in third world countries in general.

From table 2, only columns I and 2 are relevant for this analysis. This is because; these are the respondents that perceive some level of seriousness associated with the industrial disturbances they experience in their area. The responses from column 3 is however not relevant because these respondents do not consider the disturbances as serious and as such do not see the disturbances as posing any danger to human and animal life and to the ecosystem in general.

In order to ascertain whether the variables are independent or related, the chi-square test was applied. A calculated value of 34.7 and a table value of 26.30 was obtained. This implies that, the industrial disturbances in the study area is significant enough to attract attention. This also shows that there is a significant difference between those who perceive industrial disturbances and those who do not, in Benin City.

Table 3: Awareness status from each area

To re-assess the respondent’s premium placed on environmental quality, the question “Do you consider the environmental impact of your daily activity” was asked. The responses are tabulated below in table 3.

Here, only residents who perceive the problem as very serious and slightly serious was considered. This is so because, those who do not perceive the disturbances are not relevant in determining the correlation.

Appendix B contains details of the correlation among the four variables. The relationship between the variables is 0.024 (see Appendix B for all necessary computations). The percentage variation of perception of industrial disturbances in the different areas of the study area is 58%. This implies that 58% of the residents in Benin-City perceive industrial disturbance as caused by industries around their neighbourhood, leaving 32% unaware to ignorance, indifference and other reasons.

This study has x-rayed the perceptions of Benin-City residents towards industrial disturbances. This was evident, as areas, which were delimited for residential purpose have been enveloped by industries and vice versa. This study has also enumerated some of the disturbances caused by industries and suggested possible ways of averting and possibly correcting the ugly trend.

Adedibu, A. A. (1997). Trends in environmental management of drainage, sewage and solid waste in Kware State. A Paper presented at a workshop organized by Kwara State environmental protection agency. Ilorin.

Olorunfemi, J. F., and Jimoh, H. I. (2000). Anthropogenic activities and the environment. In Jimoh, H. I. And Ifabiyi, I. (Eds). Contemporary Issues in Environmental Studies. Ilorin: Haytee press and publishing company Ltd.

Sum of squares within and between groups

Means sum of squares within (MSW)

r14=0.01Suggesting a positive but weak correlation

r24=0.651Suggesting a positive and strong correlation

r34=0.668Suggesting a positive and strong correlation 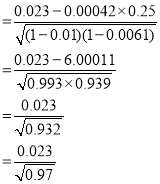