‘Explain how the major environmental systems (atmosphere, hydrosphere, pedosphere and biosphere) interact and are interrelated’

In this assignment I will discuss and explain how our four major environmental systems the atmosphere, hydrosphere, pedosphere and biosphere interact and are interrelated. I will explain each one individually then go onto detailing how they link with one another with examples of photosynthesis, respiration and precipitation with the help of conceptual diagrams, lecture notes and my own personal knowledge. 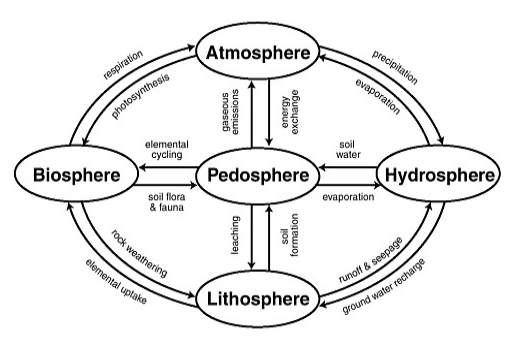 Our planet is made up of four basic ‘spheres’ or also known as ‘the four great realms of earth’ (Strahler and Strahler, 1994, pp. 7-7). Each serves a purpose and is interrelated with one-another and requires each other to form the life-cycle we live in. Figure 1 below shows a basic form of how our four main environmental systems interact:

Our atmosphere consists of many elements and plays an important part in making our planet inhabitable and sustainable for life. It comprises of around 78% nitrogen, 21% oxygen, 1% argon and a small trace of gases such as carbon dioxide (earth system pp). There are also several layers which can be split up which are the Troposphere, Stratosphere, Mesosphere and the Ionosphere (White, 1984, pp. 71 -71). The atmosphere today has been derived from the Earth itself by chemical and biochemical reactions (White, 1984, pp. 68 – 68) and also plays a vital role in creating our Earth’s weather systems.

The hydrosphere is the Earth’s liquid cycle; it contains our rivers, lakes, oceans, streams, glaciers and groundwater and is linked into our water cycle. It’s our most dominate environmental system and covers around 70% of the earth’s surface which it contrives of features for plants and animals to inhabit. It also contains 1.4 billion cubic kilometres of water and water is essential to life and required for the survival of organisms (Strahler & Strahler, 1999, pp. 7 – 7).

The biosphere can be referred as the part of our environmental system where life exists. The term biosphere is used to describe either this veneer of life, or these organisms together with the surface environments in which they interact (White, 1984, pp. 128 – 128). It consists of abiotic (non-living) and biotic (living) components and it extends from our deepest oceans all the way to around 10km above sea level (earth system pp) and incorporates all different kinds of organisms and species.

The Pedosphere is the Earth’s outer layer which contrive of soils and soil formations. It can also be linked in with the Lithosphere but has its own determined category. It provides a solid foundation for sustainability for plants and other organisms to live. The major factors influencing soil and soil development are parent material, climate, vegetation and time (Strahler & Strahler, 1999, pp. 240 – 240). There are two main classes of soils which are primary and secondary which vary in terms of substance. 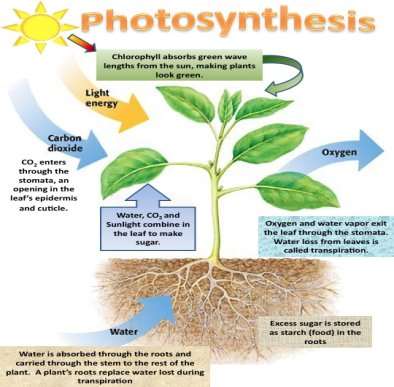 Photosynthesis is the process by which higher plants, algae, and certain species of bacterial transform and store solar energy in the form of energy-rich organic molecules (Eaton-Rye, Tripathy, & Sharkey, 2011, pp 1-1) and is a direct interaction between the atmosphere and biosphere. The process occurs from when the sun releases energy rays into our atmosphere which are absorbed by the biosphere within plants via their leaves, they then use this energy to convert carbon dioxide and water into oxygen, sugar and starch which is used as a food source by plants. Plants contain chloroplasts which makes the scenario of photosynthesis possible. They then release oxygen back into our atmosphere which humans intake and release back carbon dioxide to complete the cycle. This interaction between the atmosphere and biosphere in terms of collaborating and enhancing organisms. Photosynthesis also contributes towards ‘fossil fuels’ (i.e., coals, oil, and gas) that power the industrial society. The fuels provide energy to fuel factories, homes and also raw materials such as plastics and other materials (Bassham, 2014). Figure 2 below shows the basic process in which photosynthesis occurs and how the cycle works: 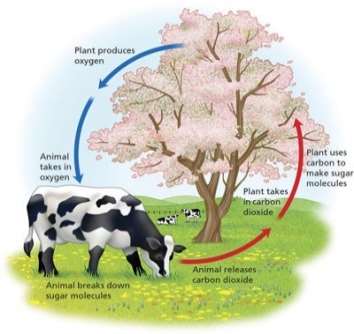 In return, respiration occurs from the process of photosynthesis in animals and plant life contributing to the atmosphere where energy is released from glucose and other substances. Respiration, which occurs in mitochondrial and bacterial membranes, utilizes energy present in organic molecules to fuel a wide range of metabolic reactions critical for cell growth and development (Eaton-Rye, Tripathy, & Sharkey, 2011, pp 1-1). There are two types of respiration, the first being aerobic which are common in all higher plants and animals and the process occurs within living cells and oxygen. It is a permanent process that continues throughout the life of plants and animals. The second is anaerobic and is common in microorganisms but very rare in higher plants and animals. The process occurs in the absence of oxygen and can be toxic to plants and animals (‘Major Differences’, n.d.). Respiration breaks down food molecules which occur inside cells to release energy, this is known as the oxygen cycle which animals and humans consume oxygen discharged by plants through the basis of metabolism. Carbon dioxide is then released by animals and humans in which plants then absorb and the whole cycle begins again starting with photosynthesis which forms part of an interrelated system and sustainability for life. Figure 3 below shows the process of the oxygen cycle with respiration between animals and plants in working order:

Precipitation is a direct interaction between the hydrosphere and the atmosphere. Water exists in the air in the form of humidity, clouds, fog and precipitation (Introducing physical geography p 77). Precipitation can form in two ways. In the first, cloud droplets collide and coalesce into larger and larger water droplets that fall as rain. In the second, ice crystals form and grow in a cloud that contains a mixture of both ice crystals and water droplets (Strahler & Strahler, 1999, pp. 86 – 86). There are many forms of precipitation which include rain, freezing rain, snow, sleet and hail which form a part of the water cycle. It also plays a part in creating our weather system which can affect the environmental systems on our planet. Rain develops when the droplets clouds hold become too heavy to sustain and eventually fall to the ground producing rain. Rain can also start out as being small ice crystals which then turn into snowflakes and as the temperature gets warmer with the flakes falling they warm up and melt into rain droplets. These rain drops can benefit organisms in the biosphere such as plants for food and growth. Snow is formed by the process of water vapour turning into ice crystals from within clouds, the process is called sublimation (‘Sublimation from Snow and Ice’, n.d.) and the snow never melts on its way down to the ground. Hail is the process of where raindrops collaborate and freeze and when the clumps get too heavy for clouds to hold they fall to the ground. Hail can form in all different sizes from tiny pebble shapes to anything up to the size of a cricket ball. Sleet is the simple form of frozen raindrops which melt then refreeze in sleet as it falls to the ground. It begins as either rain or snow which falls through layers of cold air which contains temperatures below freezing. Figure 4 below shows the water cycle with precipitation incorporated into it: 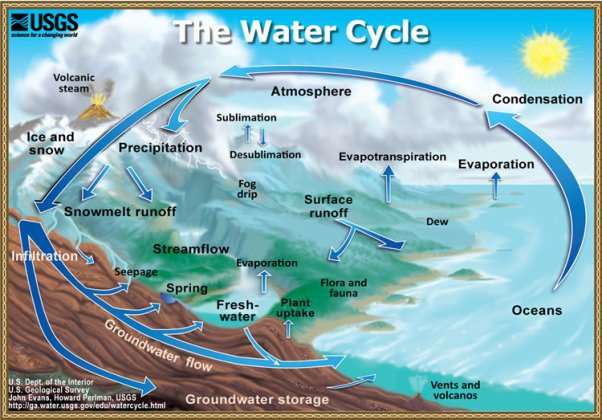 In conclusion our planet contrives of many different environments which contain contrasting forms of organisms and life. Us as humans have categorised and produced cycles in which all these processes occur. The cycles play a major role in how life is sustained on our planet and each cycle relies and interacts with one another in maintaining the constant flow needed. Having these processes helps us understand how things work and how we can help make a difference to insuring to managing our environment for future generations.

Organizations, B. on I.S and Affairs, P. and G. (2009) Frontiers in Soil Science Research: Report of a Workshop. United States: National Academies Press.