Workers in the Gulf

The Labor Market in Gulf Countries

An individual labor law for every country in GCC is designed in accordance with international labor laws and standards, conventions and recommendations of International Labor Organization that aim to eliminate unfair labor practices and equal treatment of laborers regarding to the nationality, social status or religious belief. This is also because of the Global Economic Crises which cause the working class of South Asian countries to be affected badly, as a result many of the workers were not paid and most of the foreigner laborers had to leave the country and they put Gulf countries on the priority because of the high economic level and better wages rates than the European countries. Gulf countries recent policies and regulations on the protection of rights emphasize on the regulation on the labor market and boost national man power in private sector, by keeping the balance in working relationships at work place, increasing the labor protection and safeguarding the employees’ interests at all. 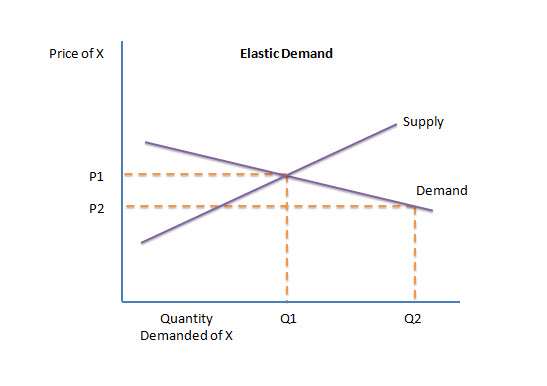 According to the reports issued by the World Bank, there is various numbers of factors that have been contributed to the situation of youth employment situation in the Gulf countries. If considering the supply side, a demographic wave has increased the share of young people in the population because of the migration youth individuals to the Gulf countries has resulted the labor supply pressures. And if the demand size of the labor market is considered, young people in the labor markets of Gulf countries widespread with structural distortions. And the fact is that the public and private sector of GCC continues to attract young people towards themselves, with higher wage and benefit packages and better job security.

This section of the report considers the level of labor force and labor market in the economy of India. The India is considered to be the second largest country in the population growth after china and according to the reports of 2012, the labor workers who were working in India were 487 million, and 90 % of these workers were working in unorganized and unincorporated companies, while only 10 % of them are working in the organized private, state owned enterprises and government sectors. In local terms, the organized sector or formal sector are described as the sectors in India related to licensed organizations that are registered and pay income tax, and sales tax etc. These organizations of India include the publicly traded companies, corporations, factories, incorporated or formally registered entities, shopping malls, hotels, and large businesses. Unorganized sector, also known as informal sector or own account enterprises, refers to all unlicensed, self-employed or unregistered economic activity such as owner manned general stores, handicrafts and handloom workers, rural traders, farmers, etc.

According to the latest reports, the migrant workers who are Indian-origin laborers are about 4 million in number who are migrant workers in the Middle East and Gulf countries alone. They are accredited to been a part of Gulf countries and the majority of workers are those and are proud themselves who built many of Dubai, Qatar, Bahrain, and Persian Gulf modern architecture, and major of their architecture is the Burj Khalifa, which is considered to be the tallest building in world’s history which has started its operation in 2010.

It is the common factor that no one wants to leave his country and the reason of leaving home country and to go abroad is that of financial surplus. These migrant workers are also attracted towards the Gulf countries because of better salaries, and getting the opportunity of even better jobs in order to remit funds and financials to support their families in India. In 2009, the reports by Middle East analysts show that the Middle East-based migrant workers from India remitted about US$20 billion. In many cases they also have to face the challenges and problems in dong jobs that is labor abuses and problems such as unpaid salaries, poor living conditions and unsafe work conditions have been claimed by the Indian migrant workers.

Moreover, it has also been seen that national migrant workers in India have been assessed to be about 4.2 million. These migrant workers work according to their capacity and abilities and they have shown the range from full-time to part-time workers, permanent and temporary workers. They are typically employed for remuneration in cash or kind, in any household through any agency or directly, to do the household work, but do not include any member of the family of an employer.

While talking to the India workforce in GCC countries, the reports suggests that India is the principal and major country of South Asia origin for the 17 million migrants in GCC countries. The Indian states are also sending their individuals also to GCC countries in order to get better employment and better remunerations. In 2004, the Indian state of Kerala only consists of the 26 percent of all households that had at least one temporary international migrant. And 89 percent of these were found to be in GCC countries (Zachariah and Rajan 2009, pp. 35, 162). According to the Philippines reports, that there were about 1.5 million temporary Overseas Filipino Workers (POEA 2011), in 2011 represented themselves while working abroad through the act of Philippine Overseas Employment Administration and according to the entire national labor force (BLES 2012) there were about 4 percent of the GCC migrants are Philippines who were working there.

The figure below shows that the financial flow comes to the India because of the remittances from abroad and it has been seen that in the period of 2009-2011, 31.4% has been received by India only from the remittances of FDI from all over the world, and in 2012, only 30 of the total remittances came from GCC countries only. 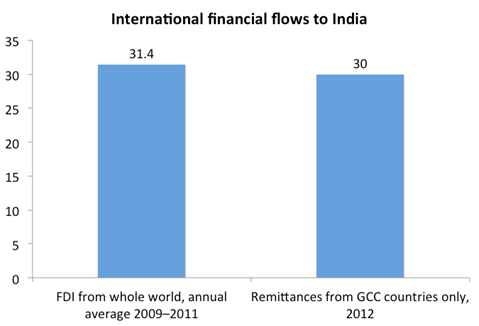 According to the latest reports, the Indian migrates are not getting paid according to their demands and that the wages rate is quite minimum in Gulf countries for them.