Yemen is basically situated on the southern tip of the Arabian Peninsula, between Oman to the northeast (288 km of borderlines) and Saudi Arabia to the north (1,458 km of borderlines). Yemen has border with the Arabian Sea and the Gulf of Aden to the south, and the Red Sea to the west. The length of coastline constitutes 1,906 kilometres and the width of coastal strip is between 30 and 60km.

Yemen is world’s 49th largest country covering the area of 527,968 square kilometres or nearly twice the size of the US state of Wyoming or about the size of France. Topographically, Yemen is divided into five main geographical areas: mountains, plateaus, coast, Empty Quarter (AR-Rub-Alkhali) and islands. Yemen has 112 islands (mostly volcanic origin) of which the biggest and most inhabited is Kamaran. Kamaran is known for exceptional wild animals and plant species. Mayonoon Island (Breem) has strategic importance due to its location which lets to control the strait of Bab Al-Mandab.

The specific feature of this country is that it is situated at the entrance to the Bab-el-Mandeb Strait, which links the Red Sea to the Indian Ocean (via the Gulf of Aden) and this circumstance permits it to call one of the most active and strategic shipping lanes in the world.

Temperatures are generally very high in Yemen, especially in the coastal regions. This part of country is hot and humid throughout the year. The central highlands at 10,000 feet (3,048 meters), experience an average annual high temperature of 21°C: average daily temperature in January stands at 14°C and in July reaches 22°C. The climate of western coastal plain is tropical, therefore temperatures occasionally exceed 54° C, and the humidity ranges from 50 to 70 per cent. Rainfall usually comes in irregular heavy torrents with averages of 130 millimetres annually. The climate in Yemen is mostly desert, very hot and humid along the coastal sections. In addition to this, Yemen‘s western mountains are affected by seasonal monsoons, which rains may occur from April to August and from November to January. 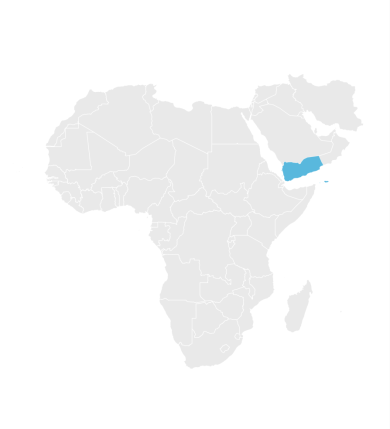 Yemen administratively is divided into 21 governorates, including the three newly created governorates Amran and Al-Daleh and Reymah. The governorates are further subdivided into a total of 333 districts and around 2,000 sub-districts.

Yemen is a relatively rural country, at an urbanization rate of just less than 33% at the end of the period. Most governorates boast low urbanization rates with the exception of Aden and Sana’a City that were 100% and 98% urbanized in 2013, respectively. According to the World Bank report 2012, governorates with the greatest poverty rate were Amran, Al-Bayda, Hajjah, and Shabwah and moat wealthy are Sana’a City and Al-Maharah.

Yemen is suffering from a strong north-south divide, with violence, armed clashes and protests hindering not just regional development and agricultural activities, but also detracting investors and much needed tourists away from the region. Up to late 2013, the UN-backed national dialogue between northern and southern representatives was mostly unsuccessful, causing UN to warn participators about “procrastination” and “obstruction” and urge breakthrough in the talks. The northern regions are expected to remain in a relatively better position than the south, due to greater political power and control of most natural resources.

The future of Yemen and its administrative division will depend on the performance of the National Dialogue Conference and the president’s decision. A new federal system in Yemen is to be expected in the near future. In early 2014, the National Dialogue Conference’s committee presented a final report on resolving the North-South tension issue. The Southern region would get 50% representation in executive, legislative and judicial bodies, as well as the army and security services. The final step is for the president to form a committee to decide on the number of regions in Yemen. 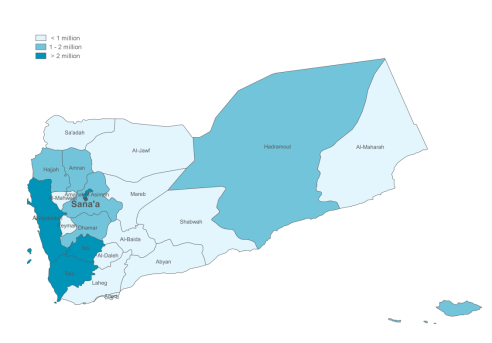 Sana’a – Yemen’s capital city – has played a key political and economic role in Yemen for centuries. Sana’a is one of the major transport hubs in Yemen. A road link from the capital leads to Ta’izz and further to the old port of Mocha. Sana’a’s function as one of the most important transport nodes in Yemen, however, was underscored by the country’s biggest international airport located in the nearby town of Al Rahabah. Through this airport, Yemen’s capital is connected to key metropolises on the Arabian Peninsula, nearby African countries and India. In 2013, United Arab Emirates national airline Etihad Airways launched its new Abu Dhabi-Sana’a route by conducting an inaugural flight with high level officials from both countries.

Excellent education is one of the most notable characteristics of the Sana’a city – the University of Sana’a, founded in 1970, is one of the biggest higher education institutions in the Arab countries. In terms of manufacturing, a once flagship plant in the city – a cotton textile mill – after years of neglect and mismanagement, stands vacant awaiting for more funding.

Nevertheless, Yemen’s capital is witnessing a major real estate boom, as urbanisation processes in the country are moving forward. Some of the on-going projects include Sana’a City Mall and Sana’a East & Sana’a Terraces. Sana’a City Mall was estimated to cost US$200 million and was scheduled to be completed in 2013. The mall is expected to become the biggest shopping centre in Yemen, hosting shops, 10 cinema halls, an amusement area, a food court, a supermarket, and a parking space for 2,000 cars. Sana’a East & Sana’a Terraces is a project worth US$400 million and expected to be completed in 2016. It will be a mixed use development encompassing residences, hotel facilities, recreation, shopping and office zones.

Sana’a’s main strengths in attracting business opportunities are the proximity of government agencies and relatively extensive infrastructure. As of 2013, Sana’a international airport was undergoing a major renovation initiative amid the governmental ambition to boost tourism revenues: the construction of 12 air bridges and four halls to enable simultaneous handling of 18 aircrafts. Yet the future development of the city is likely to be significantly constrained by an on-going severe water crisis and lack of security. If the city’s water resources do not get replenished, Sana’a is expected to become a “ghost town” by 2030, according to an insight by the Reuters investigation.

Aden, located 400 km south of the capital Sana’a, is a vital seaport of Yemen, handling more than 60% of the country’s total incoming ships in 2012 and nearly 70% of net registered tonnage. Throughout its history, commercial activities in the port dominated in Aden’s economy. It used to be a major refuelling stop for vessels under the British colonial rule in 1950-1960 and later an economic engine of South Yemen. However, recently, the port has been witnessing a major blow to its operations, resulting from political protests in the country following the Arab Spring and disagreements between the national government and the port operator Dubai Ports (DP) World that abandoned its obligations in 2012. With the port operations having been so essential to Aden, as of early 2013, Yemeni authorities were negotiating a master plan for the city’s future development with the World Bank.

Aden has strengths that may be utilized to realise its commercial and tourism potential. It is strategically positioned in close proximity to major trade routes. Given its location on the Gulf of Aden, the city can potentially avoid widespread water shortages in Yemen if resources are mobilised to implement sea water desalination projects.

Yet a major weakness in the city’s development has been the poor execution of laid out plans. For example, Aden Free Zone, created in 1991, is still only an empty parch of land, while in nearby Djibouti, the Free Zone, established in 2004, is already up and running.

Aden’s port has seen a precipitous decline of transhipment volumes of 37% per year in 2007-2009, whereas Djibouti port’s figures have been on the rise (15% growth per annum in the same period). Future development of Aden will greatly depend on whether city’s officials can follow through with commitments and plans.

Ta’izz is one of the most populous cities in Yemen. Ta’izz is Yemen’s most developed industrial city. Adequate rainfall and arable soil in the surrounding areas boost agro-industrial activities in Ta’izz, particularly coffee, cotton and vegetable cultivation. The city is also known for its leather and jewellery industries. Another important factor contributing to the development of Ta’izz’s industrial sector is the proximity of Aden, Al Hodeidah and Mocha ports which provide for an easy shipment of produced goods.

Ta’izz is the capital of the most populous governorate of the same name, with a relatively large consumer market providing further benefits for local companies. In fact, numerous biggest businesses in Yemen are located in Ta’izz, some of which belong to the HSA Group – Yemen’s major conglomerate engaged in manufacturing, commercial and services sectors. Ta’izz has good prospects for continued growth; yet as in all of Yemen, progress is primarily stalled by political upheavals and lack of security.