ELEMENTS AND CHARACTERISTICS OF RURAL TRANSPORT MODES IN AUCHI AND ENVIRONS

In as much as it is easier to define the concept ‘transport’, the word ‘rural’ is a bit more difficult. Like its urban concept, there have been problems with definitions of ‘rural’ since no single criterion could be used because some countries use low population figures while other use high population figure in determining ‘rural’. There is a demographic definition of ‘rural’ using minimum population thresholds. Often the minimum population figures that a place must have to qualify as a rural area is specified. This minimum population size varies from one place to the other depending on the situation of the country concerned. It has been noted that a population of 2,500 and below is the distinction on which rural areas are recognized in the United States of America. However, the figures used in other countries vary remarkably from that of the U.S.A. In Denmark, a rural place is an agglomeration of 250 or less people. Greece, rural places include agglomerations of 10,000 or less, whereas Guatamala has considered places as rural if they have 2,000 or less inhabitants, plus places with 1,500 or less inhabitants of which running water service is provided in their houses (Ola, 2000). According to the Nigerian (1952) census, a rural place is an area having a population of less than 5,000. By contrast, the 1963 census fixed 20,000 or less people. In Canada, it is below 1,000, in France, it is 2,000 and below and in Japan it is below 3,000. Thus, rural population is defined in terms of settlement below 20,000 population as in Nigeria.

The term ‘rural’ has therefore, generated more controversy in the literature and involves economic, sociological, ethnic, racial and numerical dimensions. In Nigeria, rural areas are inhabited by people whose occupations are primarily agriculture (Aloba, 1986). The spatial nature of resources in rural areas made the provision of rural roads network necessary factor for development. As a result of the neglect, the rural areas have always been associated with under-development as well as classified as zones of high propensity for out migration (Udo, 1975; Uyanga, 1980; and Makinwa, 1981). Rural area can therefore be defined as an area dominated by extensive land uses such as agriculture and forestry or large space of under-developed land.

The term ‘rural transport’ can be defined as short-distance movements between an urban centre and the surrounding rural areas, between two rural settlements or between a rural settlement and the farmland that belongs to it (Aloba, 1986; Aluko, 2000). However, the modes, routes and traffic of rural transport may depend to some extent, on the prevailing geographical, environmental and technological development of the area under study. Rural transport therefore, means movement of people, goods and services within rural areas and between (rural areas) and urban centres that will afford the rural areas the opportunity to reach their economic growth and trade potential to enable them attain their desired quality of life.

The search for a new rural transport planning paradigm in developing countries began in a some what unfocused manner. The initial point of departure was simply dissatisfaction with the existing implied policy – reliance on infrastructure investment for conventional motorized vehicles as both the catalyst for economic and social change, and the prime means of enhancing accessibility and personal mobility, with vehicle supply being left to the private sector (Howe, 2001;Atubi and Ali, 2008). Early criticism focused on the unnecessarily high design standards applied to local feeder, penetration or development – roads, and the resulting slow and uncertain rate of network development (Stuckey, 1973); the in-affordability and indeed non-availability of motor vehicles to the mass of population, and the neglect of effective policies for the development of the local transport and vehicle system (Howe, 1975).

The substitution of household for the transport system as the fundamental unit of travel analysis enabled a conceptual leap in rural transport studies to take place. The first systematic use of the travel characteristics of the household as the basic unit of travel study and analysis in developing countries took place during the mid-1980’s in the course of two studies, one in Tanzania and one in Ghana (Bawell and Malmberg- Calvo, 1986; Barwell and Howe, 1987). The core of the method was a structured interview, which recorded basic data about a household and the local and external travel activities of its members. It required a broadening of the notion of transport which was defined as travel from home for any purpose and by any means of movement, including walking or carrying loads on the head and back. The result was a quantification of household movements in terms of trips, time spent traveling and distance traveled to various facilities such as supplies of water, firewood, health clinic, grain grinding mills, markets etc, tonne and tonne-km of effort, modes used, and the gender and adult child involvement split. Methodologically the technique was a significant advance since a degree of precision in quantifying household travel demands was achieved (Barwell, et al, 1987).

ELEMENTS OF RURAL TRANSPORT IN AUCHI AND ENVIRONS

Approach to rural transport study requires a holistic understanding of the mobility and access needs of the rural communities. It is a demand – led, or people – centred approach with emphasis on the need expressed by affected communities (i.e. Auchi and environs). In context, rural transport is more broadly seen as an input into successful rural livelihood strategies, within which access consists of three complementary elements – (a) rural transport services and intermediate means of transport, (b) location and quality of facilities and (c) Rural infrastructure as show in figure 1 (Lebo and Schelling, 2001).

This deals with availability, affordability of rural transport services and intermediate means of transport in rural areas and their role in promoting rural economic development (Slack, 1990; Riverson and Carapetis, 1991). The knowledge base covers information on rural travel patterns and surveying the role of government in creating an enabling environment for the services (establishing import duties and licenses, taxes, tariff and route regulation, safety measures and subsidies), the role of the private sector (acting as operators, manufactures and credit institutions) and social and cultural aspects. Other issues include the provision of vehicles (motorized and non-motorized) and their application (Melmberg-Calvo, 1994b; Barwell, 1996). 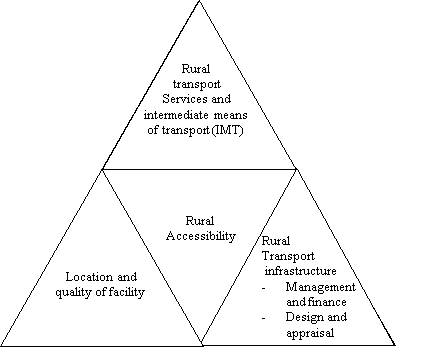 Fig. 1: The Elements of Rural Transport

LOCATION AND QUALITY OF FACILITIES

The second element of a comprehensive rural transport framework is the location and quality of facilities. The distance from households to facilities such as wells, forest, grinding mills, schools, and health centres determines the amount of time rural dwellers spend on transport activities. Numerous studies on rural transport have shown that rural households, and particularly women, spend a substantial amount of time and effort on transport activities (McCall, 1985; Malmberg-Calvo, 1994a, 1998). The bulk of these efforts are required for domestic subsistence activities. In view of planners, this time is unproductive and wasted, and a drain on potentially productive labour – the principal economic resource for most rural households (Edmonds, 1998). Thus improved quality and better locations of facilities are important to consider when examining alternative access improvements in rural areas.

CHARACTERISTICS OF RURAL TRANSPORT MODES IN AUCHI AND ENVIRONS

The rural transport road mode in Auchi and environs could be classified into two major parts:

Stuckey, B. (1973). Transportation and African Development: The land-locked Countries. Institute for Economic Development and Planning, Ibadan.