was firstly intended to cover the whole population. Social Security consists of a set of institutions that serve to protect individuals from the consequences of various events or situations, usually referred to as social risks. There are four branches in the social security system in France. These are illness, old age/retirement, family and work accident/occupational disease. The compulsory “general scheme” covers the general population and mostly the employees. Another one is the agricultural scheme that includes agricultural-sector employees and non-salaried workers against all risks. Moreover, the last one is the supplementary pension schemes, ARRCO and AGIRC, which are compulsory for all private-sector employees affiliated to the general and agricultural schemes. 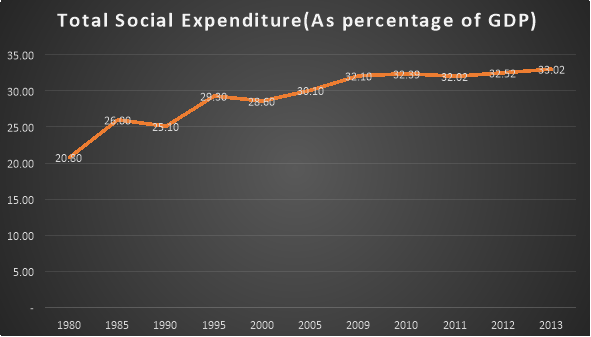 In an unfunded defined benefit pension, no assets are set aside and the benefits are paid for by the employer or other pension sponsor as and when they are paid. Generally many countries ensure unfunded pensions arrangements, workers have benefits paid directly out of current taxes and social security contributions. We called this method as a Pay-as-you-go method. Generally most European countries are applying this method. However, many countries like France, have a hybrid systems which means they are partially funded. France set up the Pension Reserve Fund in July, 2001. The pension Reserve Fund, originally “Fonds de Reserve pour les Retraites”, has an aim of using funds from privatisalitions of state holdings to finance the future shortfall of the state PAYG pensions system.

Data for Dependency Ratio (demographic data): changes over time. Show the data on a graph and describe the trend 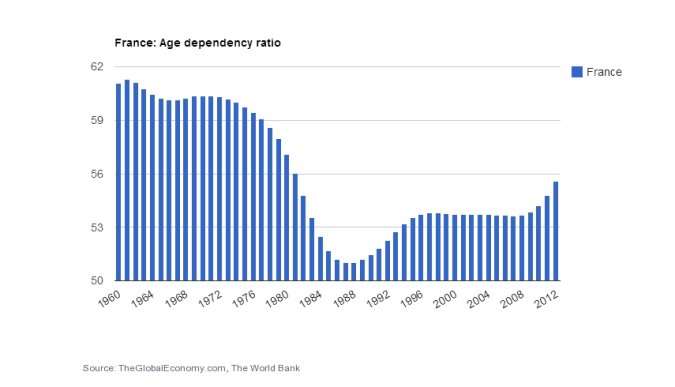 Income Distribution among the Aged Population

The population of France was estimated 64,612,939 in 2014 and the income per household is 2,140 € nets/month. France is one of only five OECD countries where income inequality and poverty have declined over the past 20 years. Income distribution among the aged population is in below; 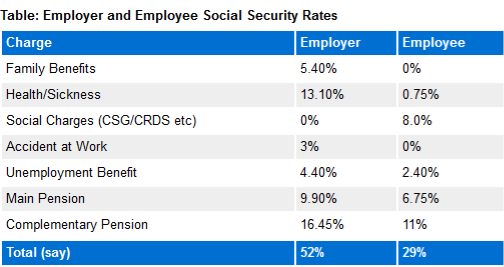 Collect Data for the Structure of Social Security Benefits (a measure such as the GRR) and show the re-distributional aspect of it (if present) on a graph.

The gross replacement rates are the most popular indicators in pension analysis. It refers to the retirement benefit per month divided by monthly labor earnings during the years before one’s retirement. In other words, GRR is only applicable for pensionable persons. One first qualifies for a full public pension after 40 years of contribution. This has been since 2003. Before that, it was 37.5 years. In recent years, there have been increased plans to raise this to 41 years.

Generally, the public pension aims for a replacement rate of 50 percent after a person’s full career. There are penalties for missing years or a given number of months, such as a reduction of 1.25-5 percent of each missing year. 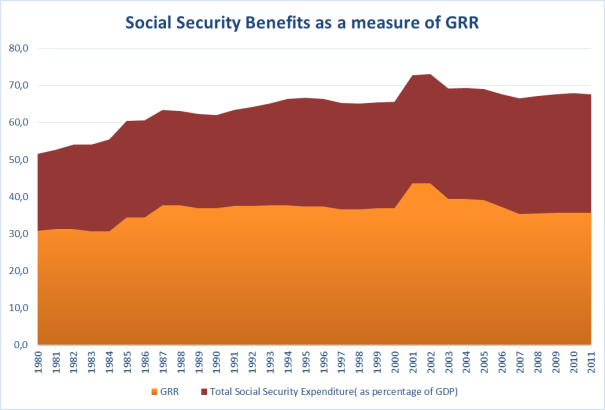 Retirement Age did not change from 2012 to 2013 in France and it is 62. The retirement age increase 60 to 62 during the previous President Nicolas Sarkozy. The average retirement age of woman is 62.17 in 2009-2013. It reached its highest level (65) in 2012 and its lowest rate (60) in 2010. The French scheme provides for two compulsory retirement systems for employees. First of all; basic retirement system, in other words “social security retirement”. This pension is implemented after the age 62. Another important point about retirement in France is pensions may be claimed later if desired. People who continue to work after the their retirement and paid contributions for more than the attributed period for a full retirement (depending on the year of birth) can be granted a higher pension. There is also an opportunity to take an early retirement under certain restrictive conditions. Early retirement is possible at age 56 for people that born in 1952. If they born in 1952 and entered the labour force before at age 16, it means that they have validated at least 43.5 years. Moreover, it is also possible at age 59 for people that stared working before age 16. They also made at least 43.5 years of effective contributions. Moreover, pensions will be increase in certain circumstancess; those are raising child, awarded in respect of a dependent spouse and constant attendance allowance.

Secondly, suplementary pension schemes are administrated by Association for Employees’ Supplementary Schemes (ARRCO) that covers employeees and General Association of Retirement Institutions for Executives (AGIRC) for executive staff. ARRCO includes both managerial and non managerial employees. In private sector, the pension system has two mandatory tiers: an earnings-related public pension and occupational schemes, based on a points system. For the these types of retirement the age have to be 65-67 relying on birth date. However, there is also possible to claim early retirement pensions of age of 55 or 57.

Family benefits are granted for illegitimate, legitimate, adopted and foster children on condition that they are dependants of the beneficiary. Individuals should exceed age 20 to benefit from “Family benefits”.

Family benefits include “basic benefits for maintenance”, “early childhood benefit” and “benefits for special purpose”. Basic benefits for maintenance are child benefit, flatâ€‘rate allowance, and meansâ€‘tested family income supplement. Child benefit is paid to families that live two or more dependent children in France. Since April 2014, child benefit rates are 32% of the monthly benefit base (€129.99) for two children and it increases to 41% (€166.55) for each additional child. Families that have at least three children aged between three and 21 years can benefit from “Family income supplement”. In France, individuals should exceed age 20 to benefit from “Family benefit” but there is an exceptional situation which is flat-rate allowance. A flatâ€‘rate allowance is paid to balance the financial loss incurred by families with three or more children when the eldest child turns 20.

Widower’s benefit: This benefit paid to surviving widows. The surviving spouse without resources or whose resources are not sufficient benefits from a pension, based on the pension the deceased would have enjoyed or benefited. In the special schemes, the pension is paid regardless of age. In the general scheme, it is paid from 55. Before that age, widows and widowers are eligible for insurance widowhood. The widow allowance is paid for two years.

This program is only applicable for the employed persons. To understand what this means, below is an explanatory list of requirements needed for one to qualify for the unemployment benefits (EU 22):

Those who qualify get a daily allowance consisting of fixed reference wage (and variable parts. The variable part ranges between 57.4 and 75 percent of the reference wage. This scheme allows a payment for a period of 4 to 24 months (for under-50s) and 36 months (for over-50s). It also depends on the job seeker’s prior insurance period and age (EU 22).

Health Care Coverage for the eligible recipients and their dependents.

In 2000, the World Health Organization declared that France selected the “close to best overall health care” in the world. France health care system is financed by government National Health Insurance and France spent 11.6% of GDP on health care and $4,118 per capita. Even if this spending on health care is less than nine countries in the OECD (for example, Germany, Canada , Switzerland) , only two countries surpassed France’s health care spending as a percent of GDP of 11.6 %. Although the country has the second highest level of alcohol consumption in the world, France’s life expectancies is 82.2 which means one of the longest life expectancies in the world.

“L’assurance maladie” is one the four branches of social security system. There are three main schemes that administred by NHI system according to occupation. First one is general scheme (CNAMTS : Caisse Nationale d’Assurance Maladie des Travailleurs Salariés) which funds almost 75% of health spending. It covers approximately 85% of the population working in industry and commerce. It also includes retired individuals. The General Fund is administered by theCaisse Primaire d’Assurance Maladie (CPAM). Individuals who live in France must register at their local CPAM for national health insurance coverage and people are issued with a “carte vitale” after registration. Card vitale is a second generation of smart card that indicates national insurance rights in electronic form. The carte vitale is not a means of payment, however it does enable the government to provide reimbursement immediately and it saves patients of the need for the huge amounts of form filling required under the old carte sociale system. Second one is agriculture scheme (MTA : Mutualité sociale agricole) which supports occupational health and prevention of occupational risks, and conducting activities to health and social. It covers 6 per cent of the population, including farmers, agricultural employees and their families. Final one is for the self employed (RSI : Régime social des independents) that covers artisans, traders, industrialists and professionals.

To address the perceived payment gaps cited above, the Council of Ministers proposed the need to find a pension system balance (that is bring financial balance, and governance and fairness in the administration of the pensions scheme). This would ensure: the adaptation of the indexation rules; increased contribution period for full pension; reduced employers’ social contribution, among others (Embassy of France in London 1).

In relation to the welfare schemes, President Francois Hollande is reportedly currently looking for ways for reforms in pension, unemployment payments and family benefits. So far, the government has relied on tax increases to account for the huge deficits discussed above. However, in the future the government might increase charges on workers and employers, as well as taxes on pensioners; raise the contribution period before one qualifies for a full pension, among others (The Economist, 2013).

Problems and issues with the system.

A number of problems and issues have been raised over Frances social security system. In relation to pension scheme reforms, for instance, many cited financing gap between private sector employees and civil servants. The latter’s payments were included as part of state expenditure, placing them at an advantage over the former group. Therefore, there have been calls to address what many have come to see as financing gap in pension schemes for those in the private sector and civil servants (Embassy of France in London 1).

There have also been fears concerning the sustainability of the systems welfare schemes. The rising deficits are a cause for alarm. The deficits of these three on the country’s general social security systems are on the increase. By 2020, the deficits of the pension, family and unemployment pay are expected to reach €20.9 billion (about $25 billion), €2.6 billion and €4.8 billion respectively (The Economist, 2013).