Water is vital as it does not have a substitute and is a finite resource (Kaplan, 2011). The demand for water is ever increasing but the supply is decreasing or is constant. This demand is brought up by factors such as population increase, industrialization and agricultural needs. Some areas receive the right amount of whereas, others do not receive the right amount. These regions are known as arid regions where rainfall and water supply is less yearly causing droughts. The report will examine the feasibility of two techniques namely desalination and building dams and reservoirs for supplying fresh water to arid regions considering factors such as cost, technology, location and water quality.

Kaplan (2011) points out that there is approximately 36 million cubic kilometres of fresh water available on the earth which equals to 3% and the rest 97% is salt water. 77% of the fresh water available is locked up in the polar icecaps, glaciers and icebergs, less than 1% in fresh water lakes, springs and rivers. The rest is found in plants, atmosphere and human bodies. However, another argument put forward by Kaplan (2011) was that just over a half of the fresh water available on the earth is being used. This means that there is plenty of fresh water available but is inefficiently used, wasted in simpler terms and not evenly distributed across the world. Therefore, arid regions are formed as they do not receive the right amount of water demanded from their population in that area. UNEP (1992) reports about 47% of the surface of the earth being arid or semi-arid. This shows almost half of the world is without water whereas, some places have plenty of fresh water available. Another report of UNEP (1997) claims about 2 billion people live in arid regions and in many cases in very poor conditions. This shows the need and importance of development of ideas and techniques to provide fresh water to these regions.

Figure 1 above shows the percentage and the distance in hectares (ha) of the surface of the earth that can be classified as an arid or a semi-arid region. From the table; Africa and Asia have the largest extension of arid zones, they account for more than a half of worlds arid regions (FAO, 2002).

According to Kucera (2014), desalination is defined as the “process of removing dissolved solids, such as salts and minerals, from water.” Desalination was used practically first in the sixteenth and the seventeenth centuries by sailors. Desalination is sometimes referred as distillation and sailors back in the sixteenth century used simple distillation technique to evaporate sea water and collecting the fresh water. The figure below from Kucera (2014) shows the total desalination capacity by different countries since 2003. The highest percentages of desalination capacity are led by the Middle East countries i.e. Saudi Arabia and UAE followed closely by; Spain, USA, China, Algeria, Australia, Israel, and India, respectively. 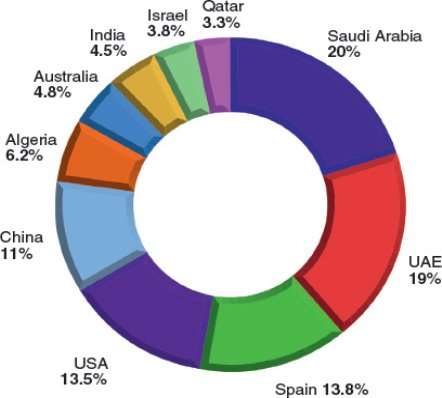 Figure 2 above also shows that desalination is a process that is mainly operated by the developing countries. Not a single African nation is seen in the figure means that the most arid region of the world is not using desalination process. Keyes , Conrad Fahy, Tansel, Berrin (2012) claim desalination have two major technological methods involved i.e. membrane and evaporative also known as thermal. Middle East use the evaporative technology while, the USA depend on the membrane process of desalination as it is more technologically advanced and has a cost advantage. “Desalination water treatment plants must be managed in an environmentally compatible manner and requires significant environmental assessment efforts depending on the quality of the concentrate and geographical location of the facility” (ibid, 2012). This shows the process of desalination for providing fresh water to arid region is quite costly and requires attention to the environment as only developing countries like the UAE and the USA can afford to use.

A dam is a structure built along rivers or streams that are used to control the water flow and store the water in reservoirs during the rainy season and release as needed during the times of drought. Reservoirs are artificial lakes that store the water (UNEP, 2000). The stored water is used in several ways; irrigation, domestic use, producing hydro-electricity and leisure activities. .Abu-zeid and.El-Shibini (2010) states “the only main source for Egypt’s water is the River Nile.” Therefore Egypt is also considered part of the arid regions of the world. The Aswan High Dam was built on the River Nile in Egypt to control floods, produce HEP- Hydro-electric power and irrigate their lands in 1971. The dam had positive impacts on rapid growing population of Aswan province. The tourism industry and the fishers noted a growth in their businesses. The majority of the Egyptian population also depends on the river for its water for domestic and industrial use. The figure below represents the area in hectares-ha of irrigation in countries of Africa in 1997. 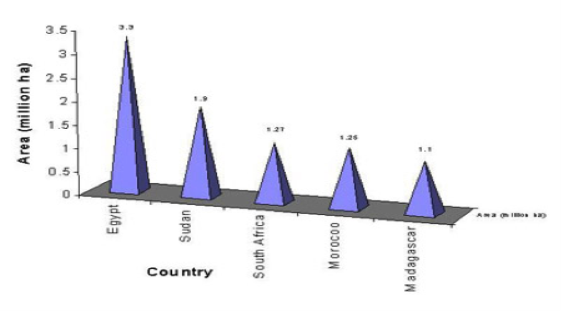 The figure shows Egypt irrigated 3.3 million hectares in 1997, and that number will keep on increasing as population increases (University of Michigan, n.d).

However, some negative impacts are noted by Abu-zeid and El-Shibini (2010) that during the construction of the dam several Egyptian residents and monuments had to immigrate to the cities of Lower Egypt. The dam being 111 metres high and 3830 metres long costs the Egyptian government about 1 billion dollars (Encyclopaedia Britannica, 2014). This shows building dams and reservoirs can have some drawbacks in the short run like cost, re-settlement, natural disasters and water borne diseases but in the long run it also improves the economy of the country and it helps the population of the country in irrigation, power and leisure activities.

It can be concluded that to provide water to arid regions of the world both the techniques are feasible. Desalination works when the region has a source of salt or seawater. Although, it is quite costly and not very friendly to the environment, it is now widely used in many countries which prove it to be efficient.

On the other hand, building dams and reservoirs is very efficient and advantageous to the economy of the country. It attracts tourists, irrigates land, provides hydro-electric power and stores water for domestic use by the population of the country. However, it is also very expensive to build a dam or a reservoir, during the construction people have to be moved, diseases are prone from the water and highly depends whether the region has a source of water like river flowing. Thus, looking at the differences in requirements desalination is better than dams and reservoirs to provide fresh water to arid regions.

University of Michigan. (n.d). Human impacts on the Nile River. [online]. Accessed at 27/03/2015. Available at: http://sitemaker.umich.edu/sec004_gp5/the_aswan_high_dam_benefits