Chapter 1 What is urban heat island?

“Did you know that people can affect the environment and even change the weather? Well, next time you are told you cannot, say you already have.”[1]

The more urban areas and construction industry develop, the more profoundly the surrounding landscape is altered but also the city scene is changed. Buildings and streets infrastructure replace open land and vegetation. Regions that were once permeable and moist are converted into impervious and dry surfaces. These changes cause urban regions to become warmer than their suburban and rural surroundings therefore forming areas of higher temperatures or heat bubbles in the landscape. This effect is now known as urban heat island and is absolutely not related to the greenhouse effect or global warming. It is strictly a land use phenomena, sometimes exacerbated by city activities.

It was in the 1810’s when Luke Howard, a British meteorologist, first investigated and in 1818-1820 described the phenomena. His study[2] was made on the London climate and he documented the effect that built-up areas have on the local weather and temperature. Nowadays, the urban heat island is one of the most studied climate effects of settlements and there is a large body of data on urban heat island characteristics from cities globally.

Apparently, surface and air temperatures are not related, however surface temperature has an indirect, but extremely significant influence on air temperature, especially in the urban canopy layer. During day time, heat is absorbed by urban infrastructure and edifices and after sunset the energy is slowly released in the air. Consequently, the air temperature in the city during night is maintained at a high level while in suburbs it is cooling down.

Urban heat island is manifested as heat bubble that incorporates the affected parts of the city. But for a better general understanding, when referred to urban heat island effect, it is normally presented as a temperature difference or comparison between the air within the urban canopy layer and that measured in a suburban or rural area outside the settlement both during day and night. 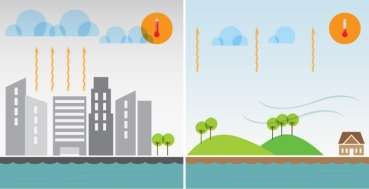 The temperature difference between the two zones is specific for every settlement and it depends significantly on local climate and city morphology. The same rule applies to how warm the urban area is during nighttime compared to daytime. As a general approximation, it could be stated that the city temperature is warmer with 2° to 12°C than suburbs and surrounding rural areas but its. As a result the annual mean air temperature of a city can be with 1° to 5°C warmer than its surroundings.[3]

How do urban heat islands form?

From the beginning it should be pointed out that every settlement is capable of generating a heat island regardless of its size or location. However, the aspect of urban heat island is characteristic to every city.

In addition to the local climate which is subjected to various meteorological factors such as temperature, relative humidity and wind, a number of man-made causes determine the occurrence and intensification of urban heat islands. This phenomena must be seen as the combined result of energy losses and gains together with the increasing area urbanization.

Settlements’ background strongly influence urban heat island formation. Climate, predominantly wind and clouds, is one of the most significant factors. Heat island levels are largest under calm and clear weather conditions while increasing winds mix the air and reduce the phenomena.

Radiative cooling is “the process by which a body releases heat”[4]. In this case the bodies are buildings and pavements. This process is substantially affected by the presence or absence of clouds therefore the level of urban heat island is different depending on the conditions. The maximum level of radiative cooling is experienced on cloudless nights. If there is no wind there is nothing that can block the release of heat in the atmosphere. Therefore the air within the urban canopy layer will continuously be heated and in this case the urban heat island reaches the highest point. Clouds reduce radiative cooling as they increase humidity level and also bring precipitations. Furthermore clouds act like a barrier that absorbs released heat and re-radiate it both back and towards the atmosphere, fact that leads to temperature equalization within the canopy layer.

When the temperature equalization is reached, the radiative cooling process stops. In this case, the urban heat island is less prominent than during clear sky nights.

Geographic location has also an influence on urban heat island. A coastal city may experience cooling of urban temperature as well as cities in cold or temperate climates. A city located in the proximity of a forested area has the tendency to create a higher urban heat island than a city developed in a desert. Forests are cooler, therefore the temperature difference between the city and the forest will be higher compared to the desert case where the temperatures are close.

One typical city can have approximately 10-20% of its land surface rooftops. Concrete, asphalt and pavements may cover up to 35-55% of the city’s area. All previously mentioned surfaces are really burning during summer, and during day time they can be hotter with more than 50°C than the air temperature. These structures and the materials they are composed of have large heat capacity and surface radiative properties that facilitate absorption and storage of solar energy. What is more is that urban construction materials are often dark in color, especially roof coverings and a low albedo effect contributes even more to the development of urban heat island.

Cities can have multiple and different formations but the ones most relevant to urban heat island are urban canyons. They are like a standard classification of the urban environment, covering the width of the streets and buildings’ height and are usually defined by a ratio between these two factors. Building height is defined by H and canyon with, which represents the streets’ width and thus the distance between buildings from the sides of the street, is defined by W. A high ratio of H:W means that the urban canyon is tall and narrow and a low H:W means that the urban canyon is low and wide. This ratio is a relative measurement. 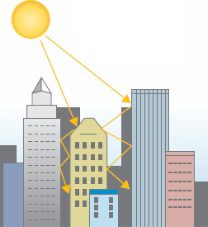 “To cool cities, build them tall and shiny”[5]. The impression that tall buildings act as a protection from heat is a completely misplaced one. In fact, small, modern cities with upstream urbanization can have a larger urban heat island effect than a bigger city with no upstream urbanization.

This study Thermal Effects of Urban Canyon Structure on the Nocturnal Heat Island: Numerical Experiment Using a Mesoscale Model Coupled with an Urban Canopy Model[6] on tall and narrow urban canyons demonstrates the complex effect that skyscrapers have. These urban canyons display a larger amount of materials that can retain heat and the façades area is close to or even bigger than the canyon area itself. Buildings act as a barrier against wind and air is hardly circulated. Narrow urban canyons with skyscrapers limit the sky view and streets are most of the time shaded. But even with a modest amount of daylight comes a large retention of heat. At the beginning of the day, only the uppermost part of the façades are directly sunlit, but during the day, the beam of light reaches lower. At the end of the day, more than 60% of the skyscrapers’ façade area is sunlit by the direct light beam and thus results a maximized heat absorption per unit area. The absorbed heat is released during night and narrow spaces between buildings act as a trap and the cooling process becomes slower. The amount of released heat combined with hot gas emissions and reduced wind speed make these city segments experience an increased urban heat island effect.

Another very common urban canyon is the wide and high type. Skyscrapers act as wind barriers but there is a higher chance to have a better natural ventilation because of the wide spaces between the buildings. The sky view is larger than in a narrow and high urban canyon therefore the building shading effect is lower. Buildings and pavements receive direct sunlight throughout the entire day and at night the cooling process is slow. This is because a large amount of heat is released in the same time in a relatively small space and there is very little wind to help the process. 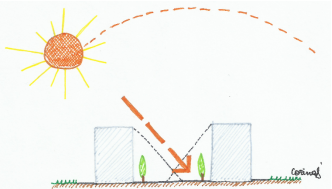 Wide and low canyons receive more sunlight and wind enters between buildings easier than in a high urban canyon. Streets are only partly shaded by buildings and buildings across the street rarely shade each other. In this situation, during the day, buildings and streets absorb heat faster and on the entire surface area. Surfaces receive direct light beam with maximum heat and they also absorb the small reflected heat by surrounding materials. Likewise heating process the cooling process at night is also faster because the large space between buildings does not trap the warmth and allows air circulation.

As previously mentioned, increasing urbanization alters the local landscape and most importantly it is done in many ways that really trap a lot of heat. Most of the city’s area is covered with different materials which obstruct the growing of vegetation and prevent the ingress of water in the soil. Therefore the natural circulation process of water in atmosphere is completely changed and it becomes a general concern only when it is too late for changing. As a result, city’s top view in general looks like a mass of concrete combined with asphalt and with not too many little green spots as parks. Therefore, cities are considered hotspots of heat also due to the lack of grass and trees. Vegetation provides moisture and shade which helps lower the surface and air temperature. Open land is a living component compared to concrete and asphalt and it is cooler due to water infiltration high albedo. When sun is shining the water is released from the ground and it cools the surface and also the air by providing humidity.

The most obvious effect of urban heat island is that it increases the annual mean temperature of the city.

Increased surface heat, especially during summer, can pose a threat to indoor temperatures as well. When a building is designed, façades and roofs are projected to act as an envelope that protects the indoor for outdoor in normal circumstances. But the envelopes’ outside materials are exposed to direct sunlight throughout the day. When the outside surfaces reach abnormal high temperatures hotter than air temperature, no matter how well the walls and roofs are insulated, the indoor air is affected. As a result, air conditioning and mechanical ventilation systems (HVAC) are overused and the energy consumption of the building is increasing.

The urban heat island can be represented as a heat bubble which incorporates the city. “When a normal cloud hits the heat bubble it can expand up to two times and can blow up about the half way through. This leads to an increase in precipitations and sometimes the midtown can see up to two times more rainfalls quantity than areas surrounding it.”[7]

[2] Howard, L., 1818-20. The climate of London: deduced from Meteorological Observations, made at different places in the neighborhood of the metropolis (1st ed., Vol. I). London